Back in 1981 I was three years out of veterinary school, dirt poor, encumbered by student loans, and looking to open my own hospital.  I saw many great locations where I could buy a house that had the proper zoning and convert it into a veterinary hospital.  It scared me to death.  The idea of getting a $100,000 mortgage and then finding more money to turn the house into a hospital made me shake in my boots. I never spent that kind of money, never had that kind of money, never borrowed that kind of money and surely couldn’t ask my parents for a loan because they didn’t have that kind of money either. I also had two children under 5 and was staking out on my own- no salary from a boss that I could depend upon. So it was a no brainer when I found a rental location in a shopping center in Hyde Park that had the right zoning and was priced right at $500 a month!

I signed the lease in July and then I wrote plans for the hospital’s layout. Over the next few months my brother and I framed out the walls, put up the sheetrock and installed the vinyl tile. I hired a plumber and electrician to do the things that we weren’t equipped to do. It took all the money I had saved since graduation- $10,000.  By mid September 1981 I was penniless but open for business. Our first client walked in while I was in overalls painting the walls. Right from the start I knew I picked the right town, the right area. I fell in love with Hyde Park and the Mid Hudson region AND I quickly got very busy.

The business gurus who know about these things tell you to start in a shopping center first. Then when you know your business is successful, look for property.  Sounded great-except the experts forgot to consider zoning.

In 1981 Hyde Park’s zoning regulations (at least with respect to veterinary hospitals) were a holdover from the early 50’s.  Veterinarians of that era treated both small animals (dog, cats and other pet animals) and large animals (cattle, horses, goats, sheep etc.). Those hospitals had outdoor runs where dogs barked both day and night. Their hospitals were out in the country far away from other houses as they should have been. By the 60’s that had all changed. Most vets either treated small animals or farm animals, not both. Small animal veterinary hospitals were small, self contained and quiet (at least outside).  They were the kind of facility that could be placed anywhere other neighborhood businesses existed. Unfortunately Hyde Park’s zoning code wasn’t up to the times.  To build a veterinary hospital would require me to buy a 15 acre parcel out in the country- zoned residential no less. That wasn’t going to happen. 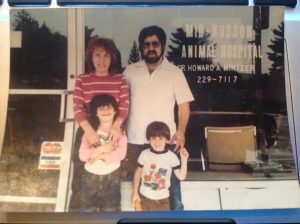 So, for the foreseeable future we were limited to the Hyde Park Plaza and we learned to do our best with it.  We started with 1000 square feet in 1981. By 1984 we were bursting at the seams (with a second veterinarian, Dr. Marie Quattro on staff), expanded into the back of the next business and now had 1300 square feet. In 1991 we moved into the next office which gave us 2400 square feet.  Finally in 2006 we broke through the wall and added the space previously occupied by Best Wok Chinese restaurant (no jokes please!) to our office and now had 3900 square feet. 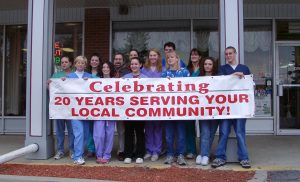 Twenty years and going strong. Also pleased to report that 3 of those ‘kids’ in the picture, Rob Redden, Jesse Cullen and Alissa Drozenski are now veterinarians (Alissa’s still in veterinary school)

Everything was great. We had enough room. The office was set up the way we wanted with all the facilities we needed. But we were still renting. And there were so many things we could do if we just owned our own building.

While I was expanding my business, Hyde Park was changing too. Around the turn of the century Hyde Park revised its master plan and part of that was to revise the zoning regulations. Suddenly veterinary hospitals were allowed in most business zones.  And now with another lease renewal coming up I felt it was the ideal time for a move.