Lots of Things Going on Out of View

If you look at the building from a distance you’d think that nothing went on this week. And that would be very far from the truth. Just like what happened after the foundation work was finished, this has been a week of finishing up the first floor and making preparation to build out the second floor.

Now that all the walls were up, they still needed to be finished. Where the windows and doors are cut into the walls, the walls become weakened. So sills, headers and cripples which are all short pieces of 2 x 4 lumber are placed to add extra support where the beams were cut. Fire blocks which are also short pieces of 2 x 4 studs are nailed between the vertical studs and provide extra support besides helping to prevent fire from spreading quickly in the walls. Who would have thought so much went on under the sheet rock. 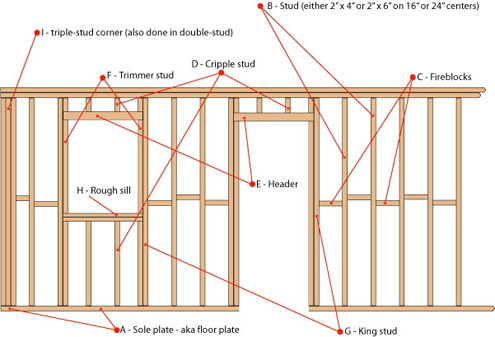 Hidden beneath the sheet rock

While that was going on other members of the work crew started sheathing the outside walls with plywood. The plywood gives extra strength to the walls and also serves as a base for applying siding which will give the building its final appearance. 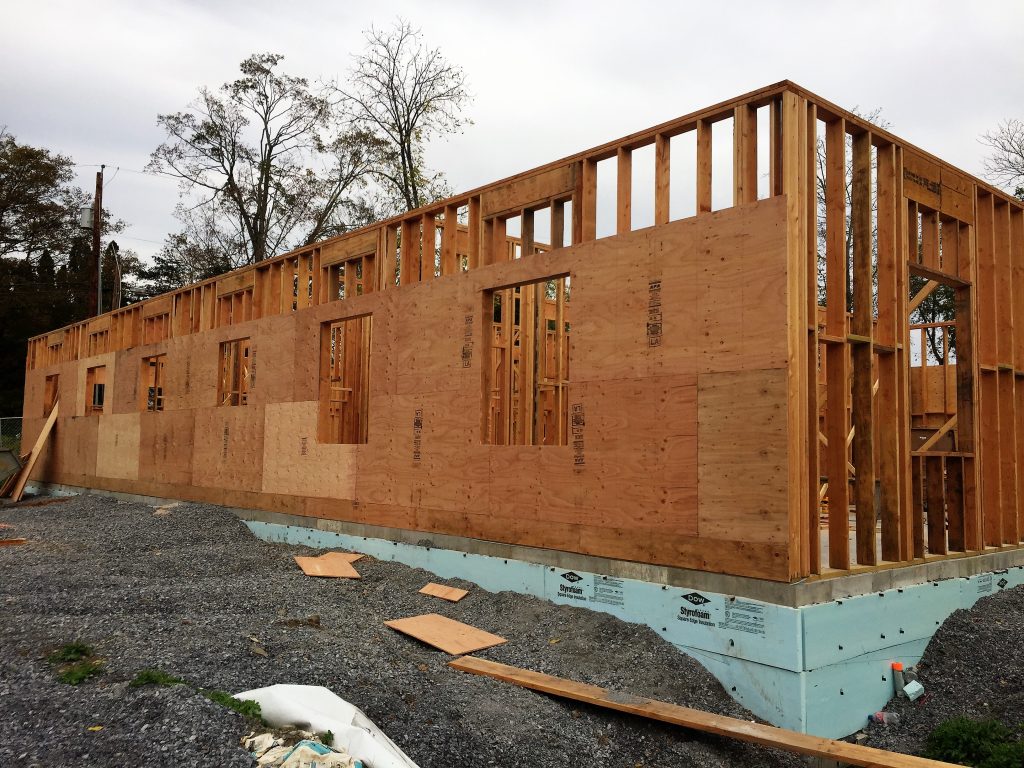 Plywood sheathing with cutouts for windows and doors

And while this was going on, around the periphery the walls were getting additional attachments to the foundation. I don’t really know if it’s needed up here in the northeast, but there isn’t a hurricane on record which will blow this building off its foundation. Also I’ve been told that because of the shape of the roof we need extra support for the walls and here it is. 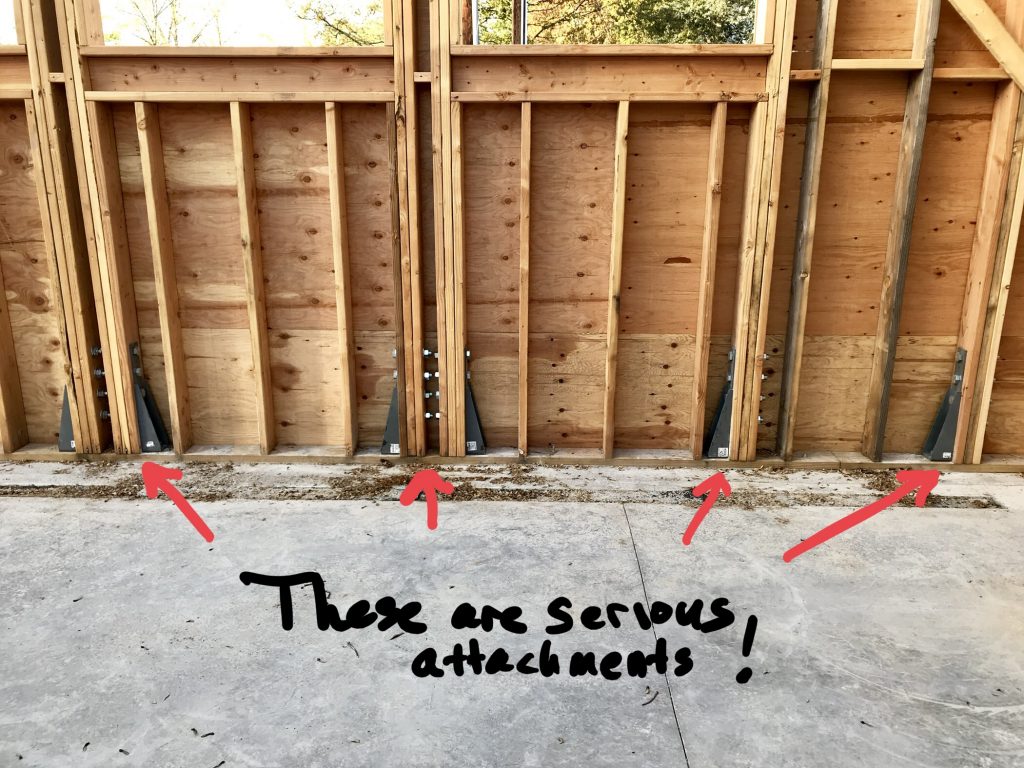 Now that the walls have been braced and all the doors and windows reinforced it is finally time to start working on the second floor and roof. Yes that’s right when we put the supports for the second floor we’re also setting up support for the roof. Some of the second floor walls will pass the roof load straight down to the foundation. 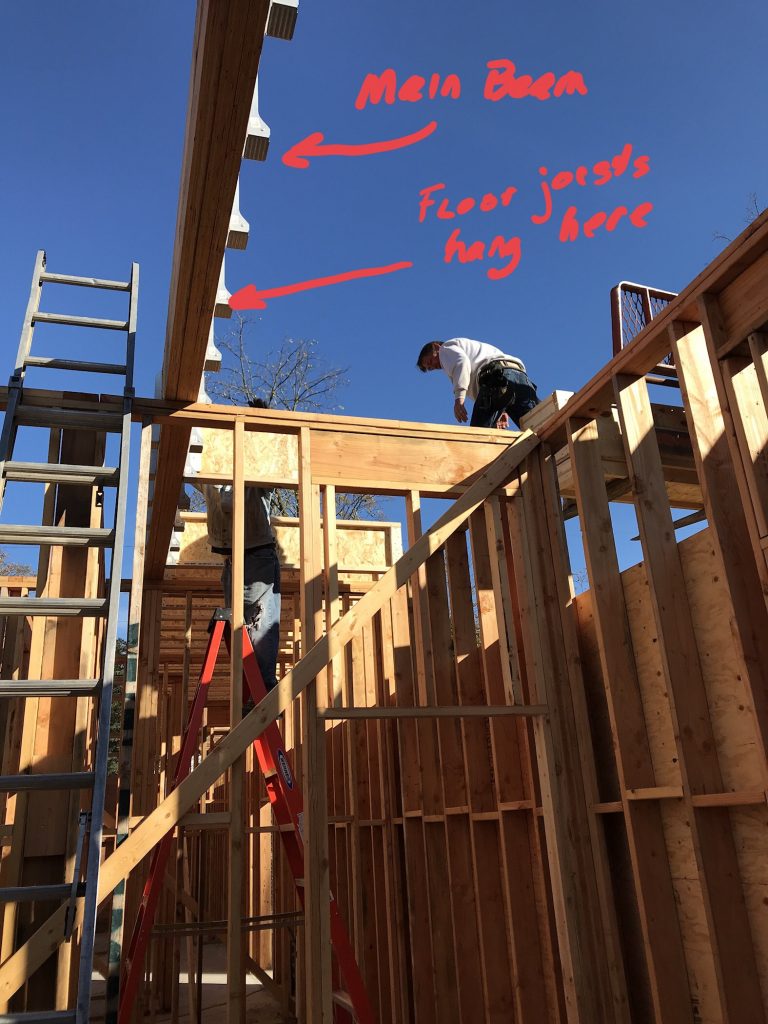 Once these main beams were in place the I beams which will support the entire second floor are put in place. 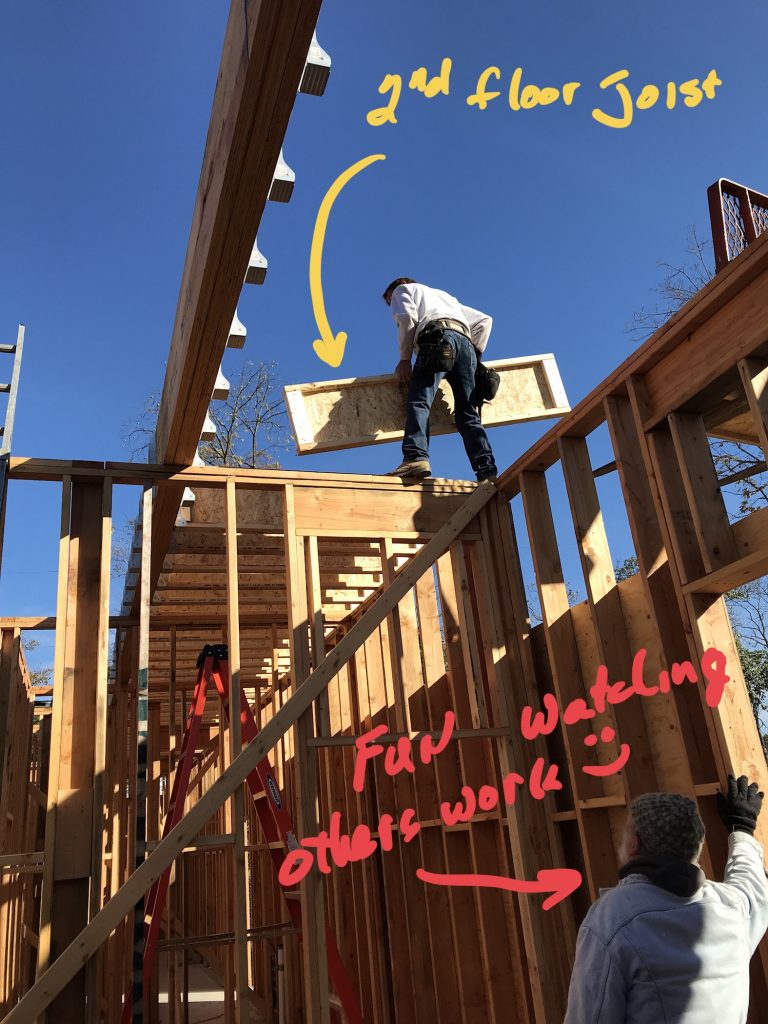 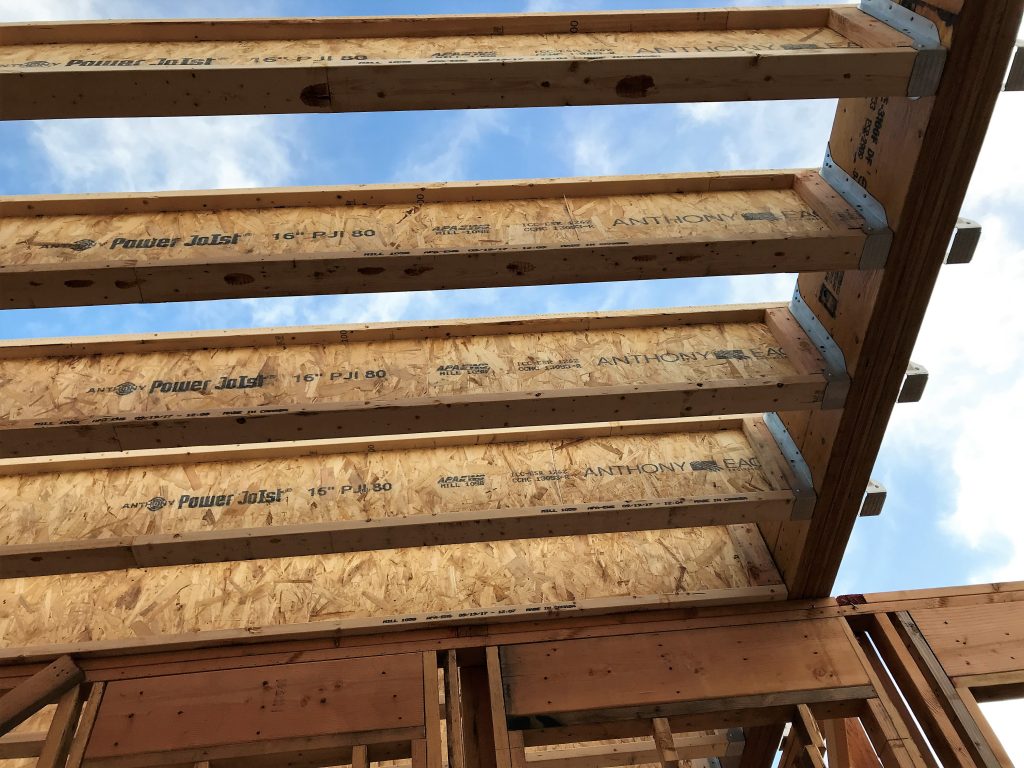 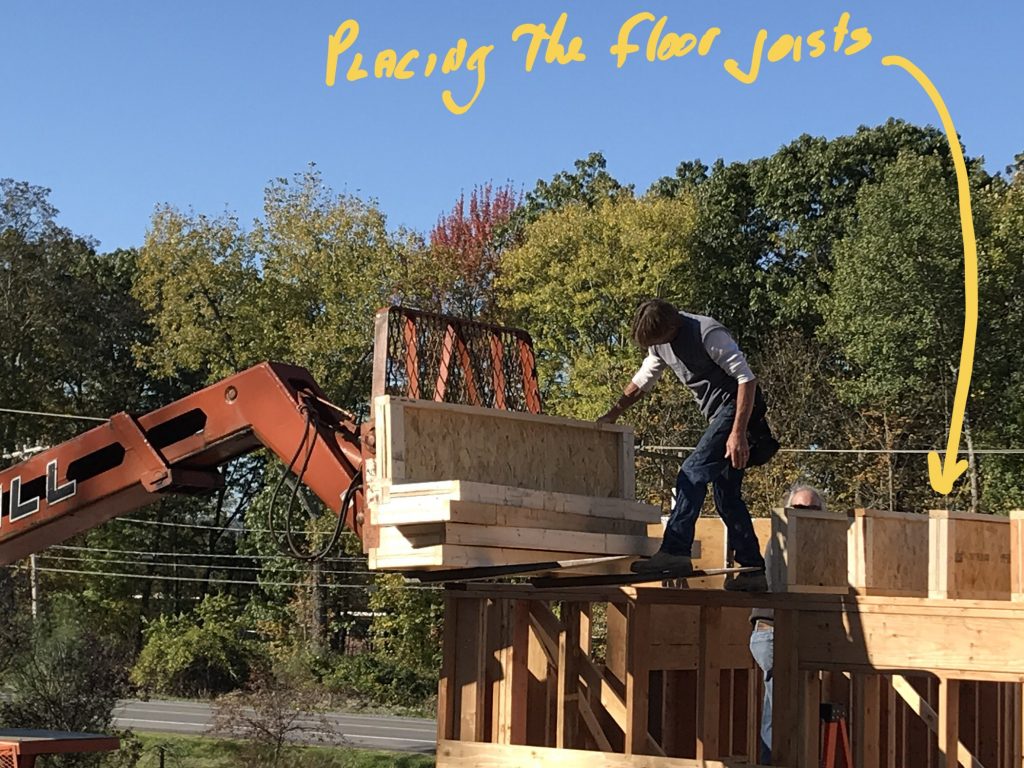 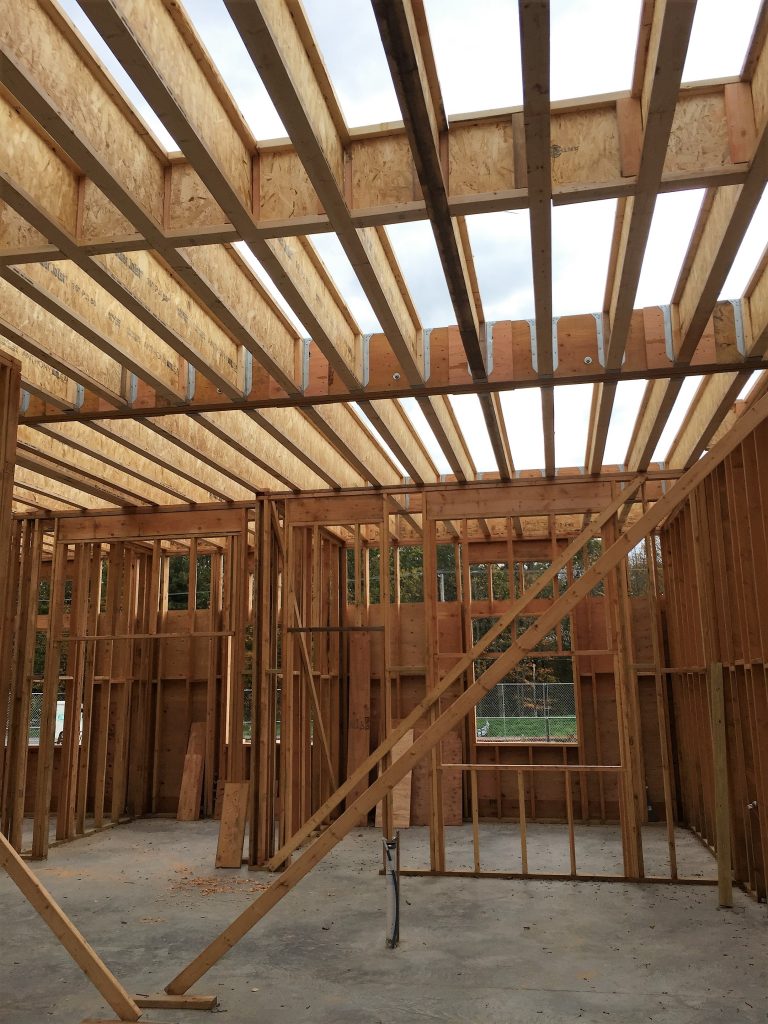 After a week of work up on the second floor, all the floor joists have been installed and the structure is sound. Later this week we’ll start to put down the plywood subflooring, upstairs walls and then roof trusses. Hopefully I’ll have some pictures from the deck of the second floor for my next blog in about a week or so,