After waiting and waiting our building permit was finally (finally, finally, finally!) approved. So I thought, let’s start…now-tomorrow! But then we hit another roadblock.  As you might imagine, our mason who had been waiting and been promised that we would start the project tomorrow (tomorrow being June, July, August) found other work to do. So instead of him waiting for us, we now had to wait for him. Well waiting is something I’ve gotten used to over the past 18 months.  Two excruciating weeks went by and finally the mason was ready to start. Fortunately we had prepared the trenches for the footings months before. But, before we poured any concrete we needed to confirm that the four marked corners hadn’t moved over the past few months. Ground does move and it wouldn’t be a good idea to put the foundation even a few inches from where the approved plans said we’d put it.

Modern technology has invaded every facet of life, even construction. Instead of laying out lines, using a transit and surveying each corner of the property we just consulted a few satellites orbiting above the earth.  That’s how GPS works.  A quick check with an extremely accurate GPS unit (not your car’s GPS) and the corners of the foundation were confirmed.

Then we switched to older technology and used string to mark a line to aid the mason in setting up the wooden forms where we’d pour our footings. 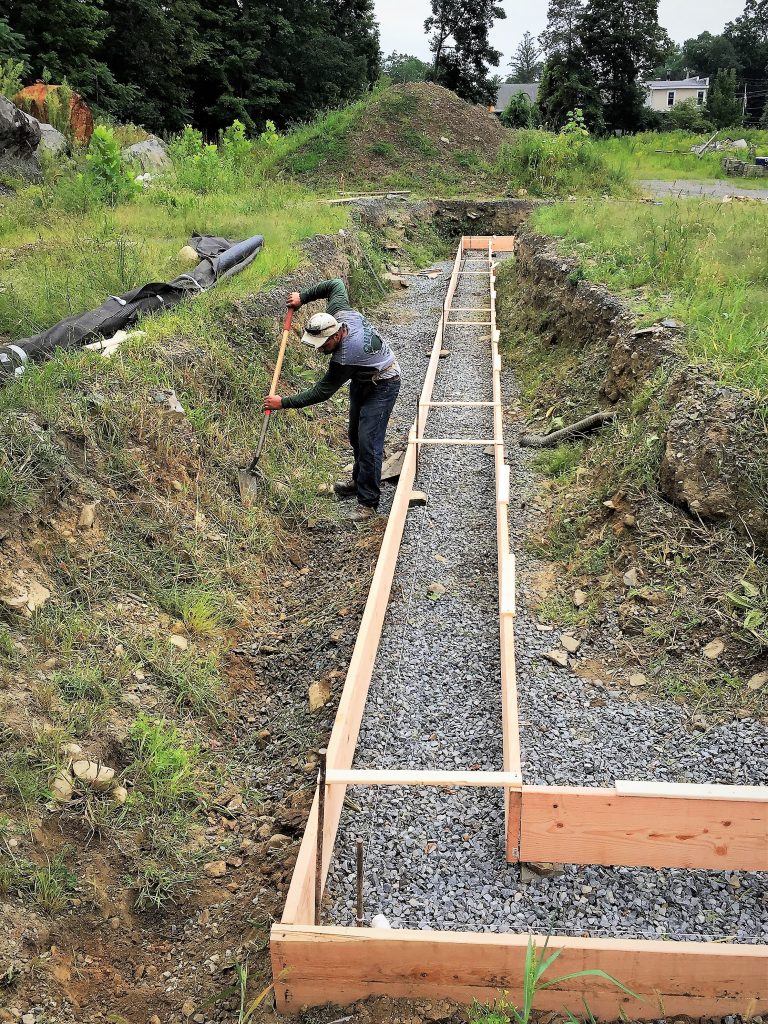 Footing forms being set up for pouring concrete 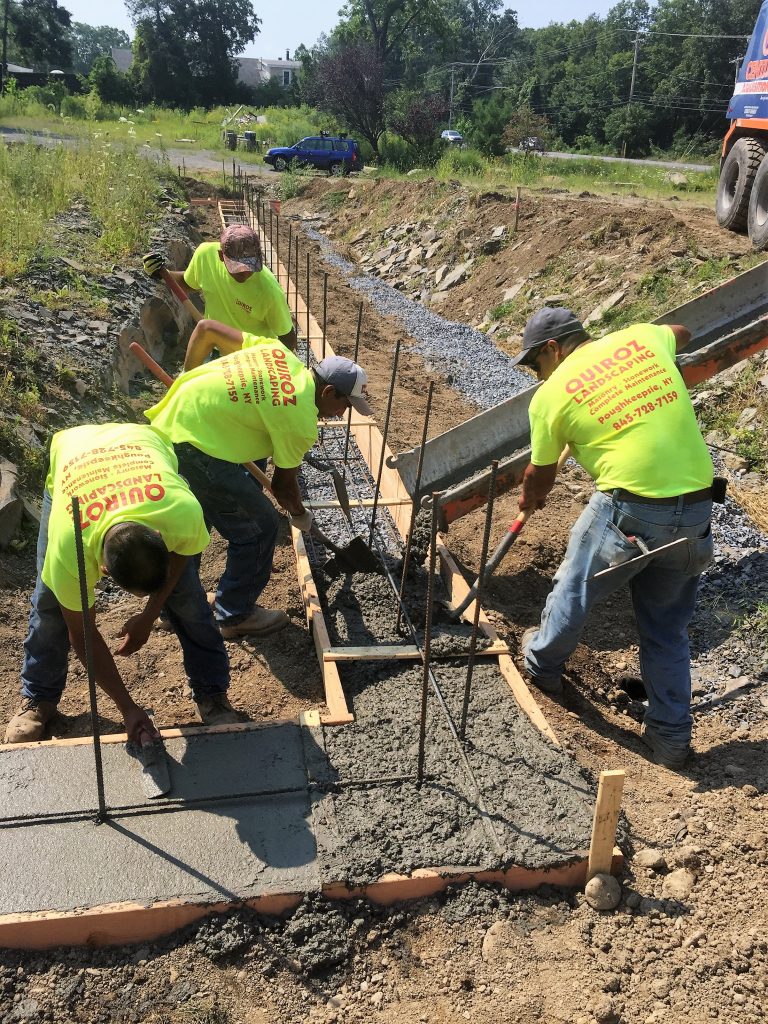 Pouring and smoothing out the footings 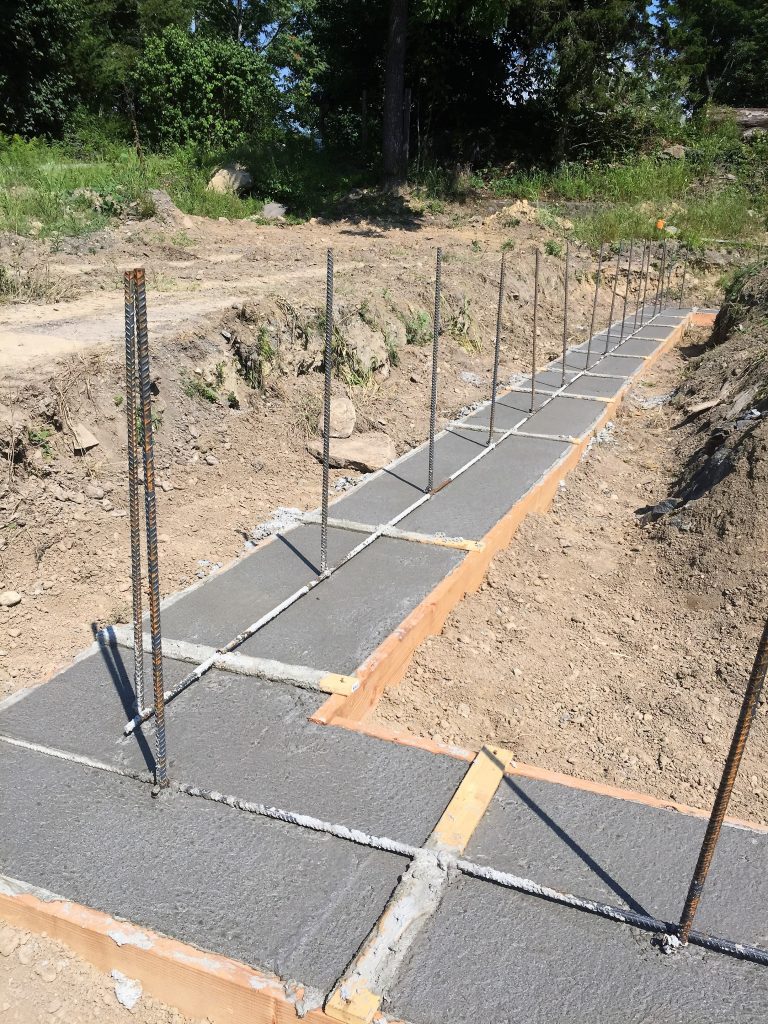 What a happy day. I’ve been waiting for so long to watch something rise out of the ground and now its here-wow!  A few days later, after the concrete had cured we removed the forms and took a look at our work. Perfect! All ready for the next step. 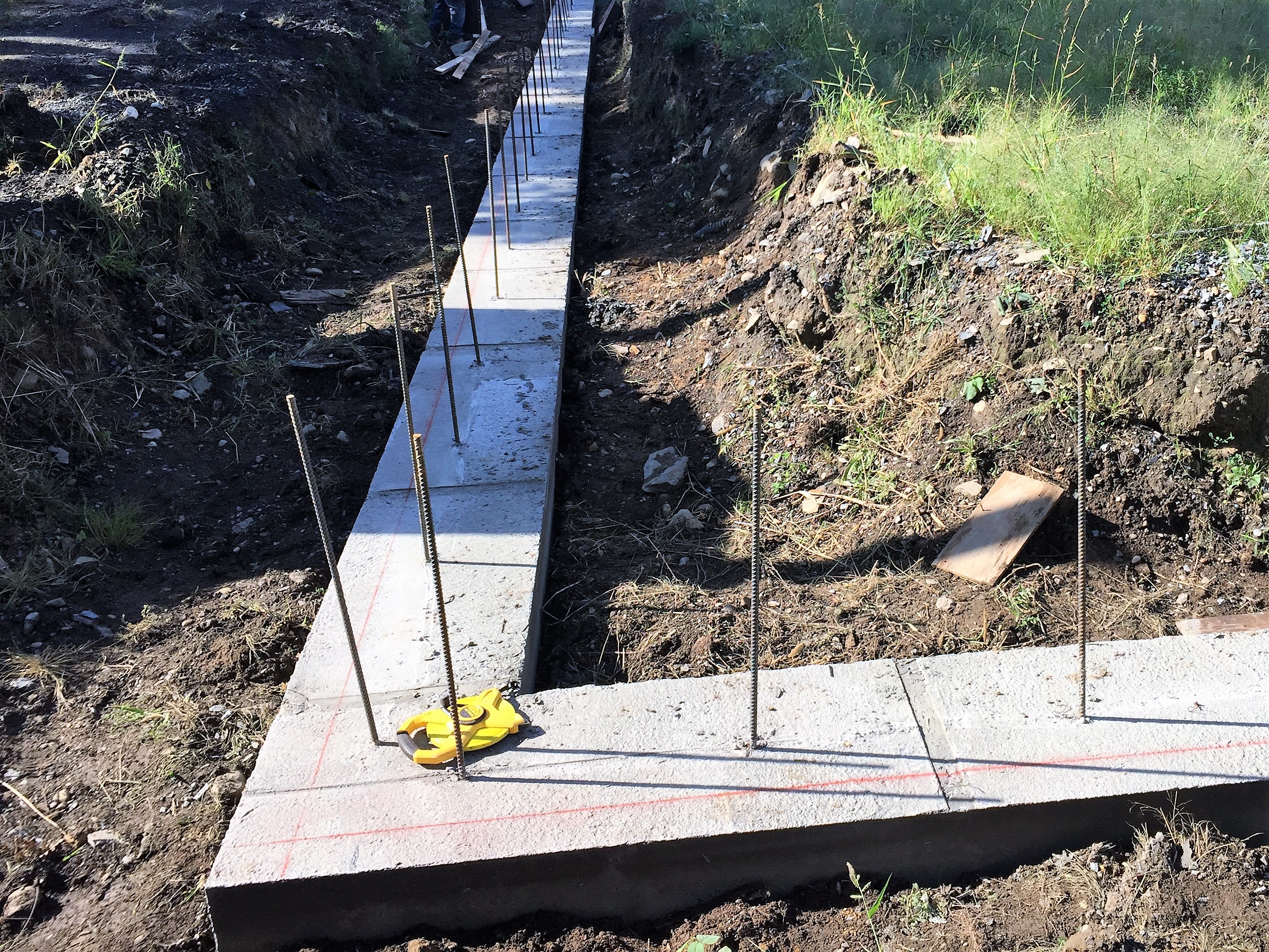 Footings with forms taken away and curing

The Walls Will Rise

Our next step will really bring this project out of the ground. Here we set up the forms to pour the foundation walls. At this point we also have to think, are there any wires or pipes that need to go through the foundation walls. We’ll have to make adjustments for them. So as you can see in the pictures below, we have small blue pipes which will leave a void in the concrete wall to allow us to pass plumbing pipes through the walls. These holes will be for pipes that will deliver waste water out of the building. The water line coming in was already placed deeply under the footings (to be frost resistant) and you can see it marked in the last picture. 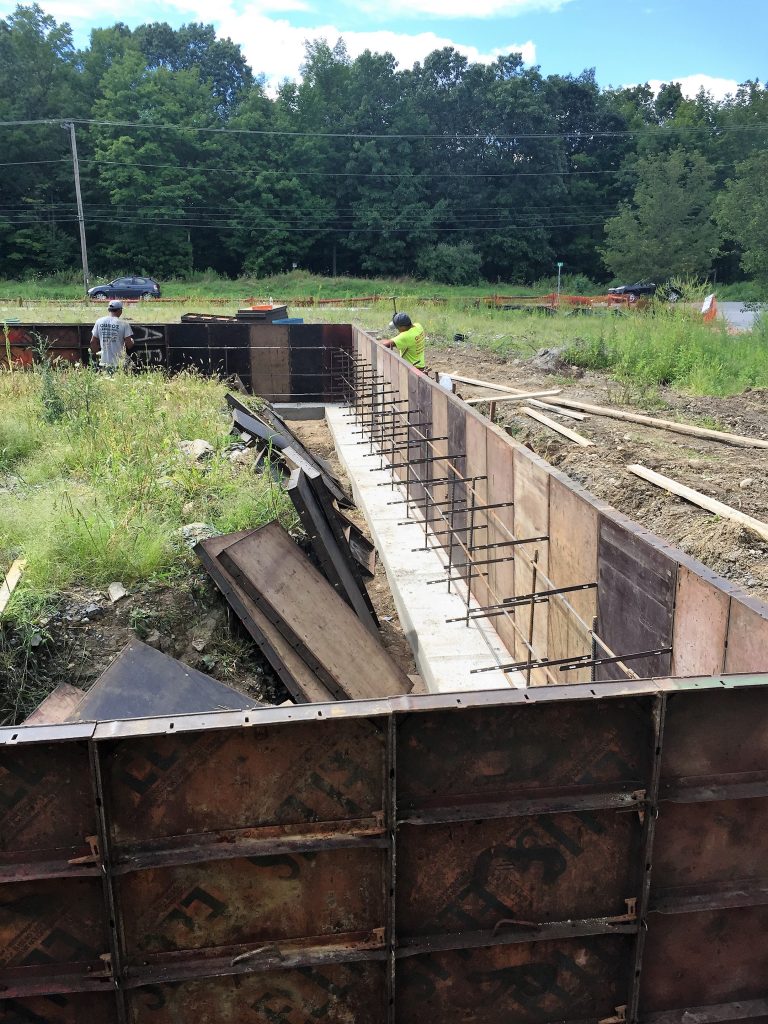 Forms set for the outside of the wall 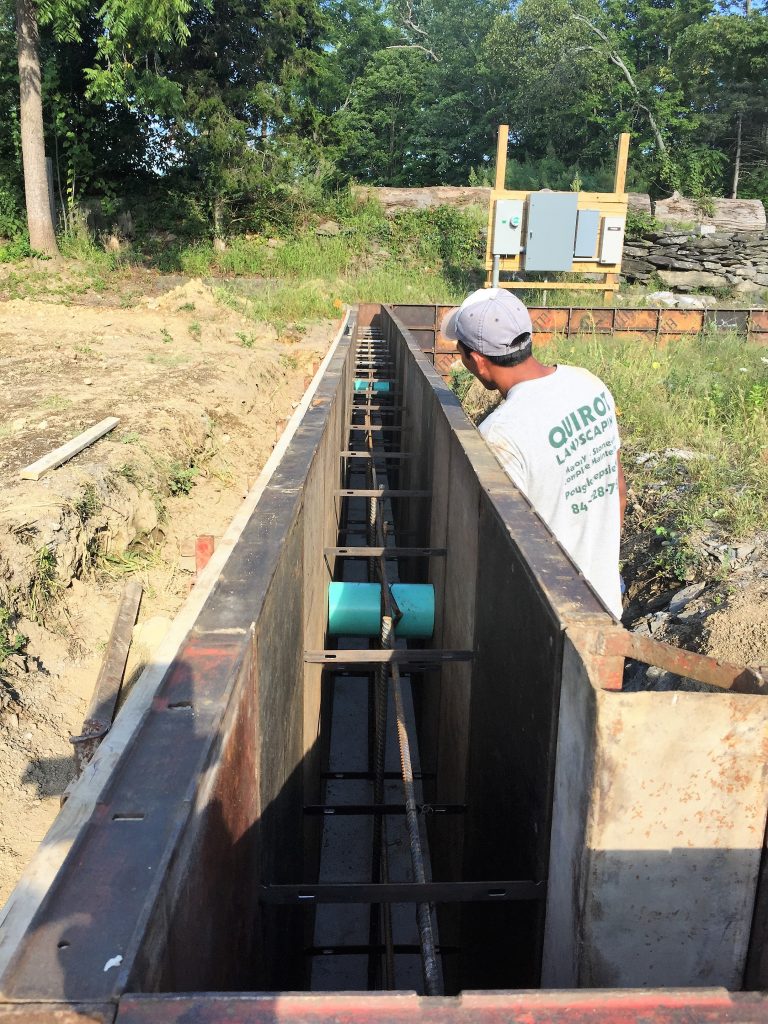 Wall forms fully set with blue spacers where pipes will exit the building. 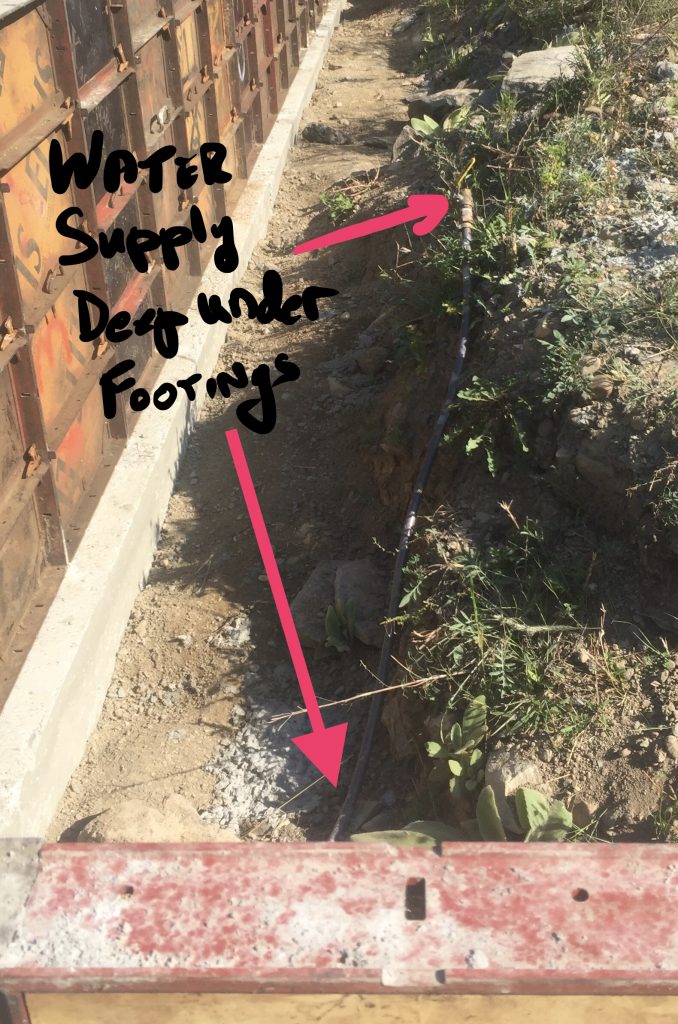 Now after another visit from the building inspector to make sure that the forms were installed properly (they were) and we’re OK to pour the walls.

Time to Pour the Walls

The walls we’re speaking about are the foundation walls which rise from below the frost line (4 feet below ground) to ground level.  The foundation walls we are preparing to pour will support the weight of the structure’s wooden walls and the roof, so this concrete needs to be mixed properly and cure properly.

Three concrete trucks each containing 10 cubic yards of concrete were needed to fill the forms.  The truck mixed the concrete (we’ve all seen these trucks) and put a trough into the forms which delivered the mixture.  Then the masons used shovels to make sure everything was distributed evenly. Once that was done they placed long bolts protruding out of the concrete that later would be used to attach the bottom of the framed walls to the concrete wall. Finally the top of the wall was finished by trowel to a smooth finish. 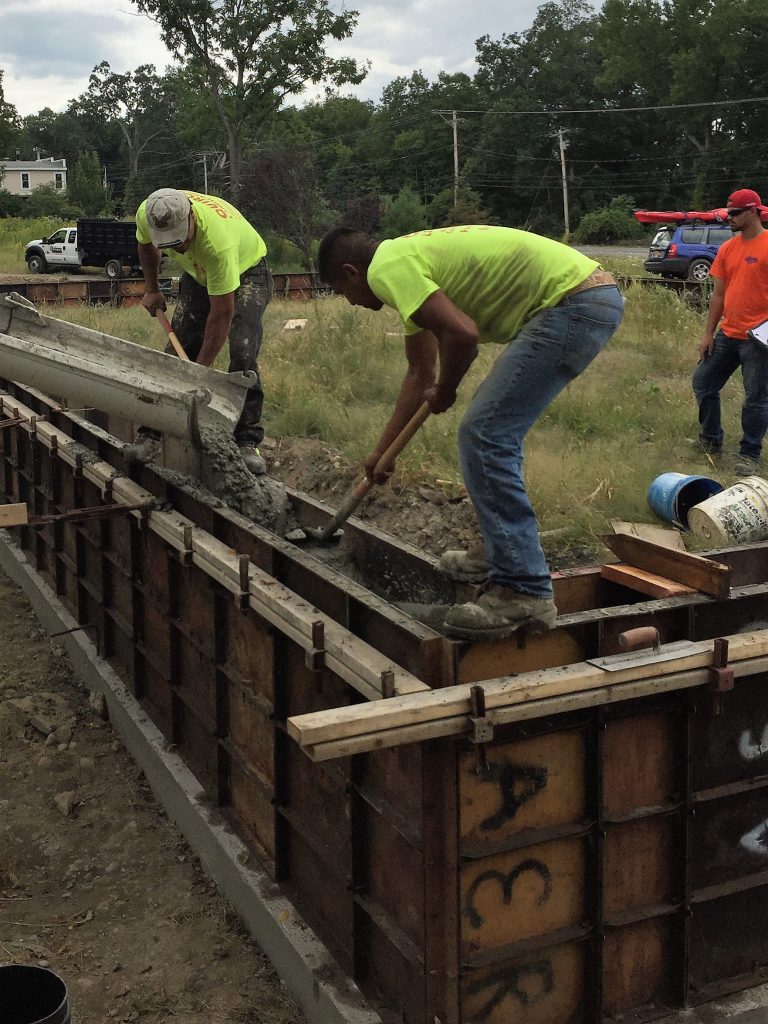 Getting the concrete to flow evenly into the forms. 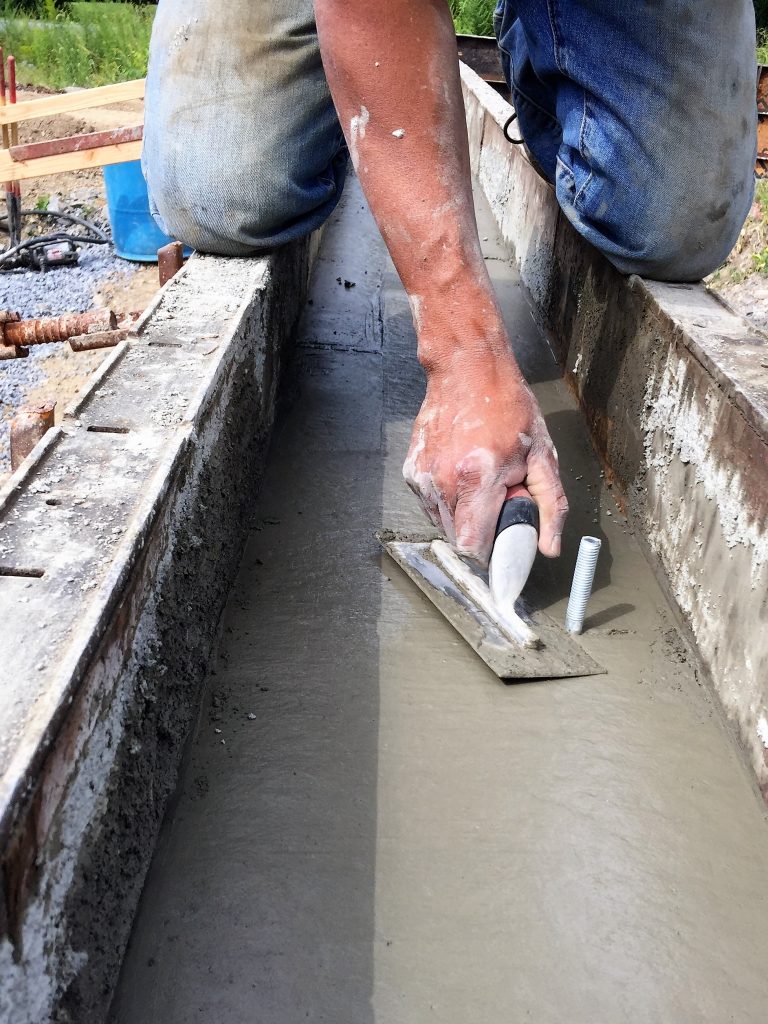 At the same time, the technician from the concrete company took samples, 2 from each truck.  The samples were set aside and 30 days from now will be put in a machine to test its strength. When the pass the test we will be assured that the foundation is strong enough to hold the load it was designed for. If it doesn’t pass…oy don’t ask! (they always pass) 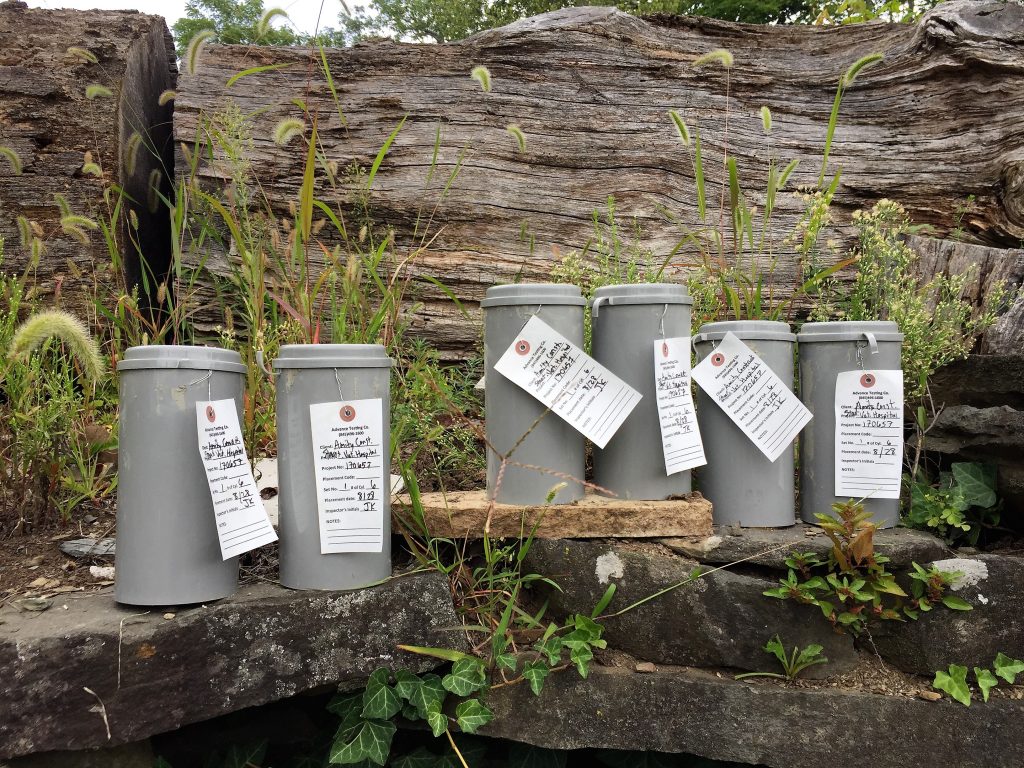 Samples to be tested for proper concrete strength.

Lets Look at the Walls

It takes four days for the concrete to cure enough to remove the forms. 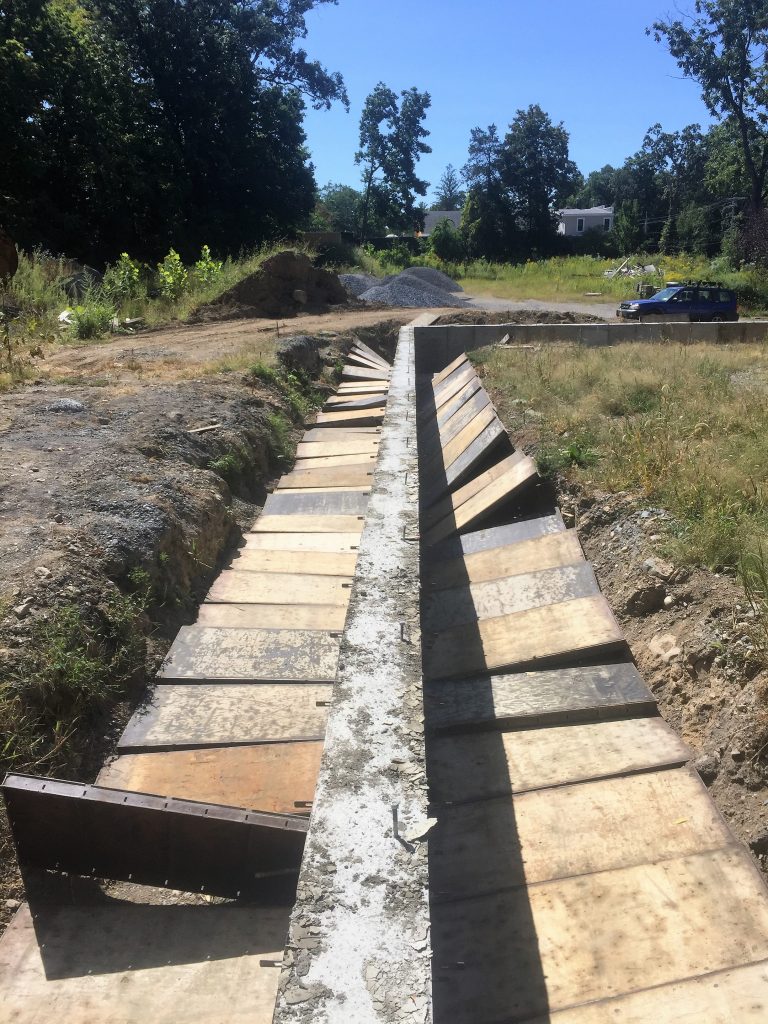 Forms lying down after removing them and exposing the new concrete wall. 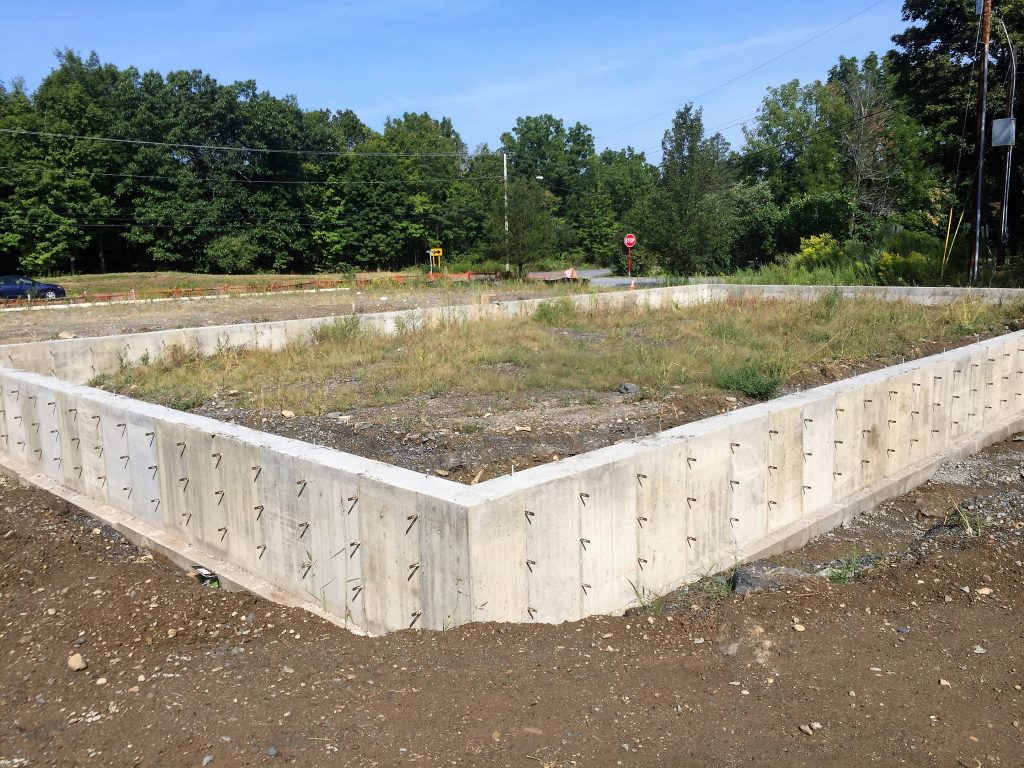 View of the the entire structure with new walls exposed.

We can see that the walls have been poured perfectly, there are no voids, no defects. The corners square and the bolts which we’ll attach the wall sills to are properly placed. 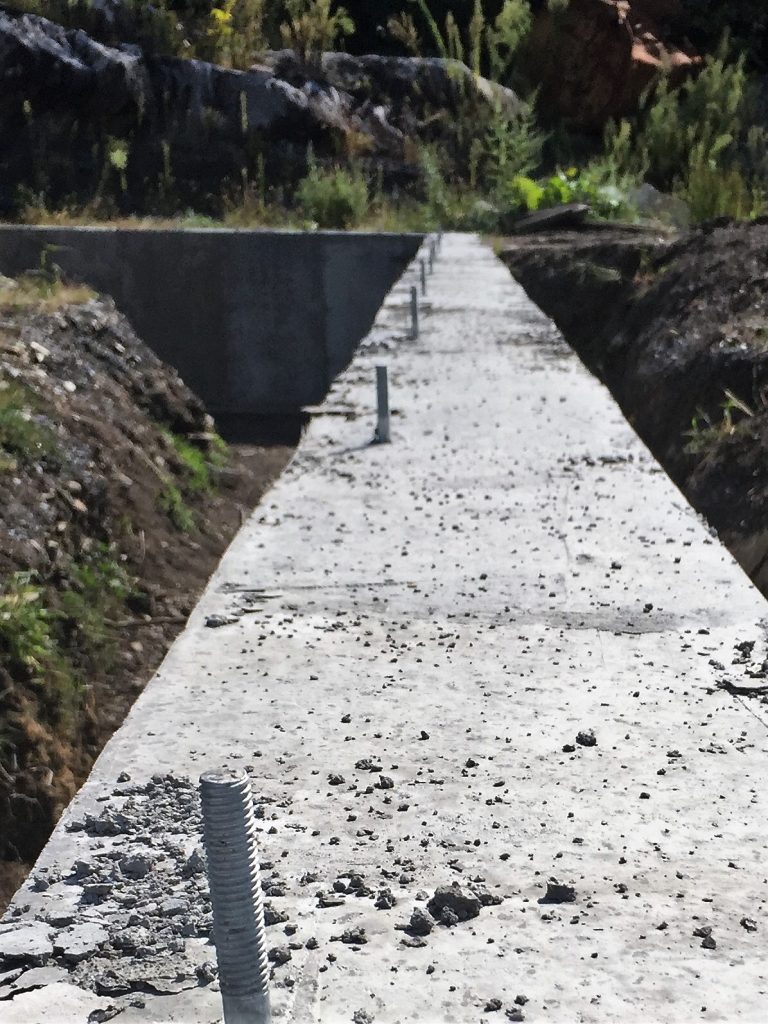 Bolts to tie in the actual structural walls

We also have buried drain pipes for use later.  Pictured below are the pipes which will be used to drain any water away from the footings. Although we’ve worked on the site to make sure it has good drainage, big storms do happen and we need to make sure the foundation does not stand in water- concrete doesn’t like that. We also have pre-positioned a drain to attach to the roof gutters to take away all the rain and snow that falls on the roof so it doesn’t pool around the foundation or by the entrance where clients or employees might slip. 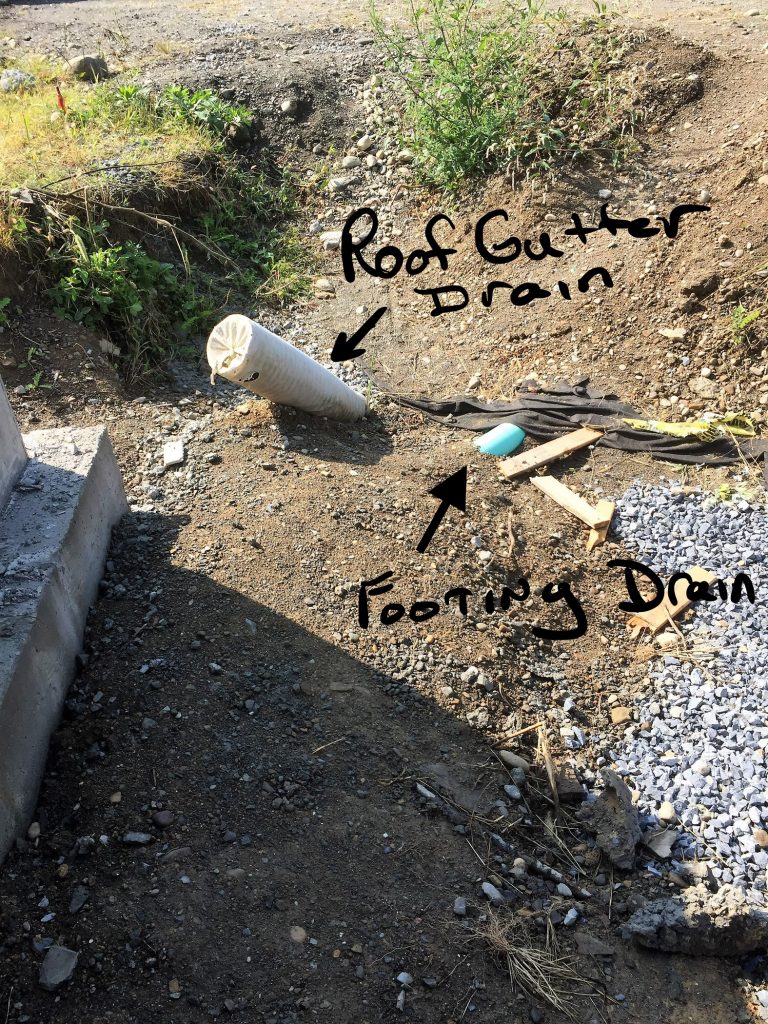 And On We Go

After months of twiddling our fingers we’ve accomplished much in the past two weeks. The next step is pouring the floor slab. But before that the plumber needs to layout his drains and pipes and such and the excavator needs to backfill around the walls and even out the soil inside the foundation walls. My next blog entry will show you how that is being done.

Meanwhile, as you pass the intersection of South Cross Road and Rt. 9 take a quick gander at our progress. Please don’t pull in though, its an active construction site and not really nice for regular cars. I’ve already cut a hole in my oil filter during a stop to check on progress.