Wow, what a whirlwind! Everything happened so quickly.  Within 6 weeks I did all of the following; made a decision to move, searched for property, found it, put in an offer, had the offer accepted, and closed the deal. Suddenly it was mine. And now what? I was the owner of land in a great location; a place where people would actually see my office and where I could make a great facility for my patients. Time to think. What was I going to do now? 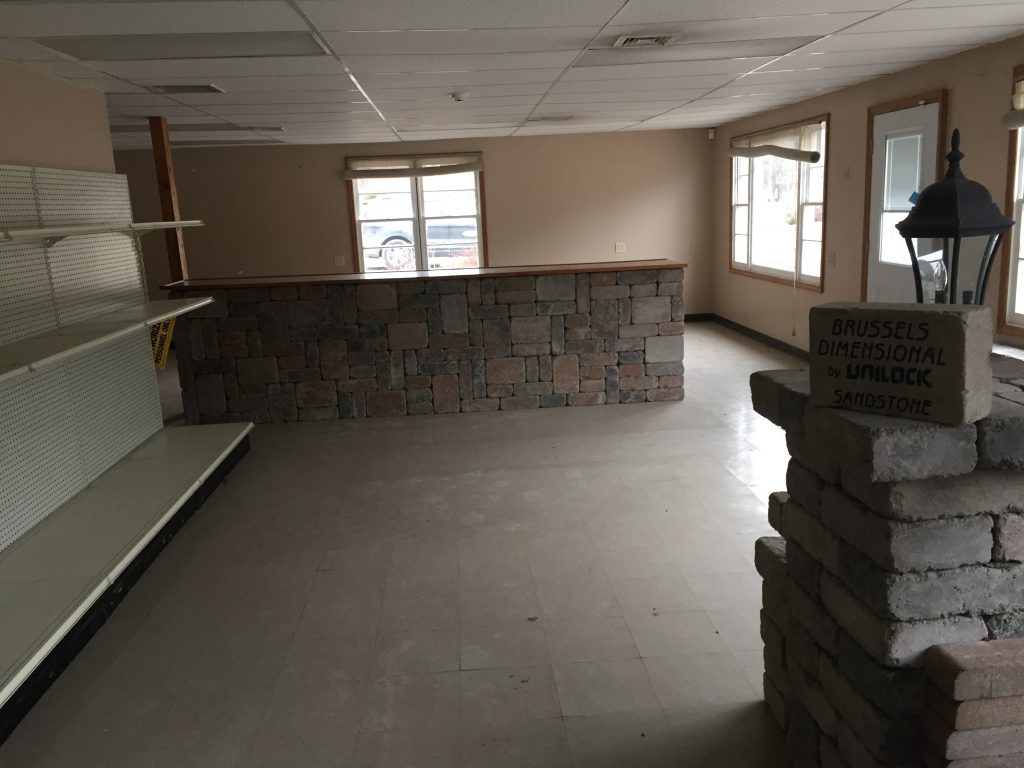 Inside of Milligan’s Landscaping. We can make this work. New walls, new floor, new ceiling, new electric and we have a new waiting room-or maybe not! 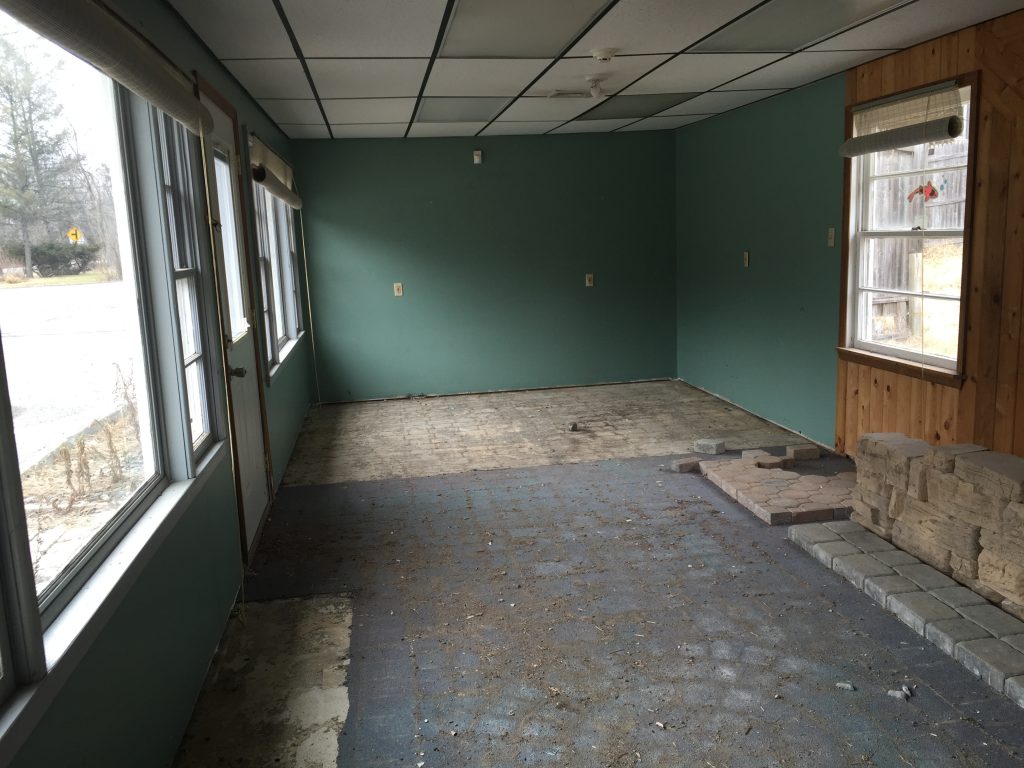 At least it’s got nice big windows going for it!

Originally I planned to renovate the existing building and add on an addition. However as my contractor and I looked more and more at the building we realized that so much renovation would be required; new electricity, new plumbing, new walls, new floor, new ceiling, that we might as well start over and build a new building. So our first order of business was to take down the old building.

If you think demolishing a building is an easy thing to do- think again. It’s more than just get a backhoe, knock it down and put it in a dumpster. You have to get a permit, and to get a permit you need to have a specialist come in and certify that there is no lead in the paint, nor asbestos insulation which might contaminate the environment when you take down the structure. Tests being done,which turned out negative- the building was then taken down in a day.

With the building gone I was able to get a good look at the property. 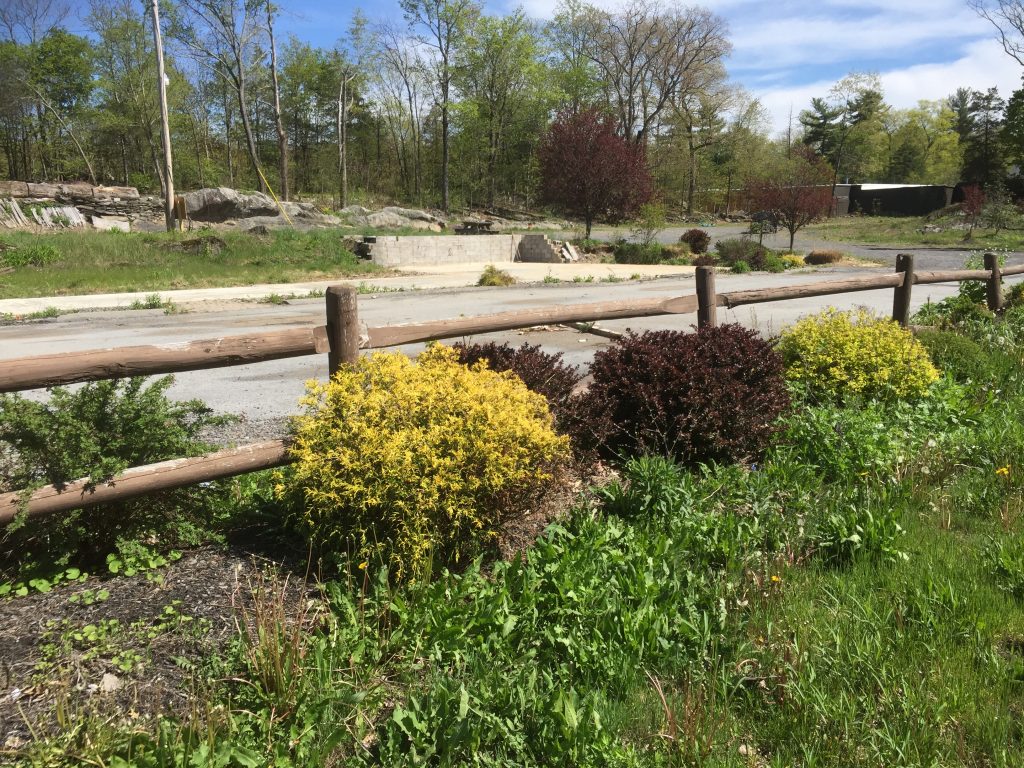 The site with the building gone. The ideal site for the building is in front of the rock ledge and part way across the parking lot

In my eyes I felt that the best placement for the new building would be over the footprint of the old building and extending forward (westward) over about half the parking lot. This would leave us plenty of room to landscape between the building and the road and allow us to integrate the existing landscaping on both sides of the old farm fencing. We would put parking in the back . And we could have our septic system across the driveway in the little field in front of the rock outcrop to the south. That decided, the next step was to do some percolation tests on the soil where we want the septic system.

We Hit a Setback

In order to install a septic system you have to pass 2 tests; a deep test and a percolation test. The deep test requires you to dig at least 5 feet before you hit groundwater. The perc test measures how long water poured into an 18 inch deep hole takes to go down 1 inch. We flunked both tests! We hit water at 3 feet and the water poured into the holes just didn’t go down. OK now lets find a Plan B. 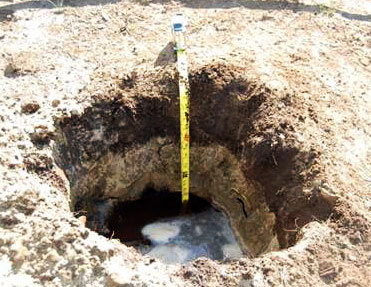 The water did not move. No absorption at all. The soil just wouldn’t let it pass.

Our site isn’t the largest in the world only a little over 1 acre. So there wasn’t a lot of land for us to work with. And as any plumber will tell you, poop doesn’t flow uphill. Therefore the only Plan B possible was to put the septic system in the ground where the old parking lot had been and place the hospital up on the stone shelf behind the old building. So now we did the same two tests on the soil under the old parking lot. Groundwater at 4 feet (better) but still no absorption on the perc test. We’ve got a problem.

Rock and Clay, Please Go Away

I was very naive about soils and septic systems when I bought this parcel.  I should have done my homework. The only other property I had ever purchased had been my home. When we did the deep test for my house the backhoe quickly dug down 5 feet without hitting even a little stone. I could have dug it with a shovel. The soil looked like well tended garden soil, sandy  loam. My engineer told me that I was very lucky, that Hyde Park soils were rarely like mine. Of course I ignored his comment, thinking well that’s what soil is supposed to look like, doesn’t all soil look like that? Obviously I didn’t get my degree in geology! Ignorance of the possibility that my parcel might not be able to support a septic system was about to come back and haunt me. 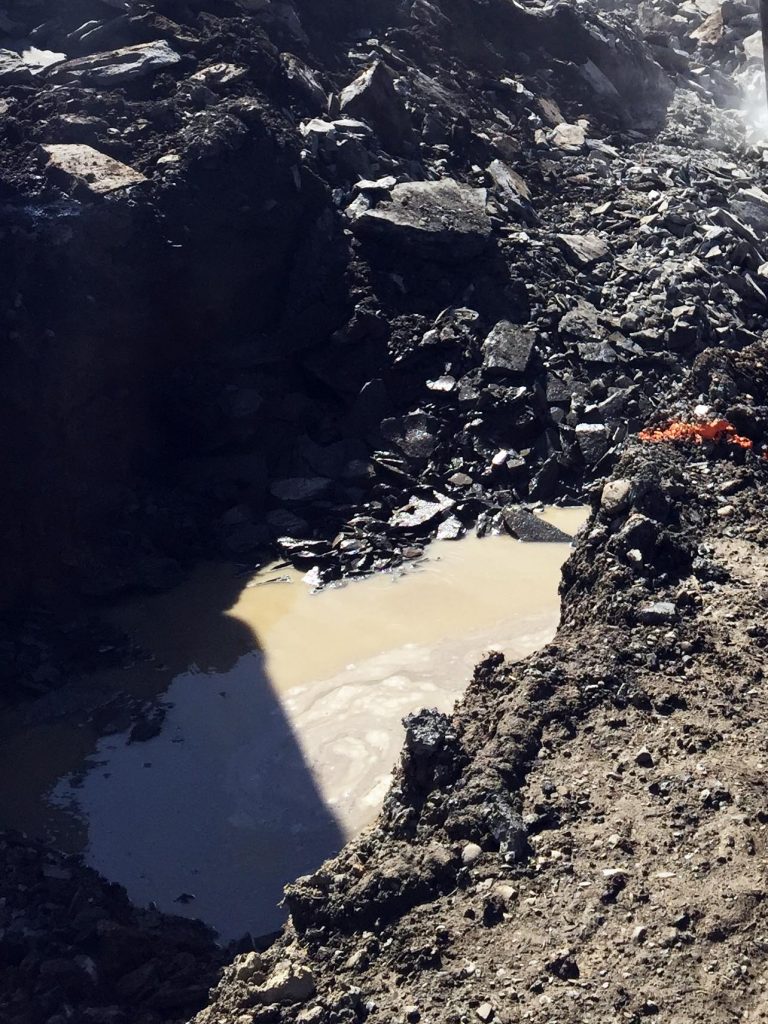 Why wouldn’t the ground absorb water? Most of Hyde Park is perched on top of shale and clay. We have an ancient inland sea to thank for the shale (millions of years ago it was mud on the sea floor which kept the sea from draining away). And we have the glaciers from the last ice age which ground up and pulverized the soil to thank for the clay.  Both clay and shale consist of very fine particles which don’t have room between the grains to allow water to flow. That gives Hyde Park its poorly draining soils.

Is There an Answer?

Following talks with the Dutchess County Department of Health, our septic engineer and our excavator we realized there was a way to fix this situation.

In the next installment I’ll tell you what we did and how we moved on from there.