Work Is Speeding Along

What a difference a week has made.  Last week we had a one story box, this week we have a real building.

Last weekend I climbed up on top of the building and looked around. The entire subfloor was nailed down and four dormers were erected and temporarily supported. I walked around the periphery of the second floor and found the sills for the second floor walls placed and marked where the studs would go. All was ready to go.

Monday, the north and south walls were laid out on the deck. Studs were nailed together, plywood applied, and the windows were cut out. By mid day both walls were raised. Now everyone who passed by are able to see what was only on paper now standing on the corner of South Cross Road and Route 9. 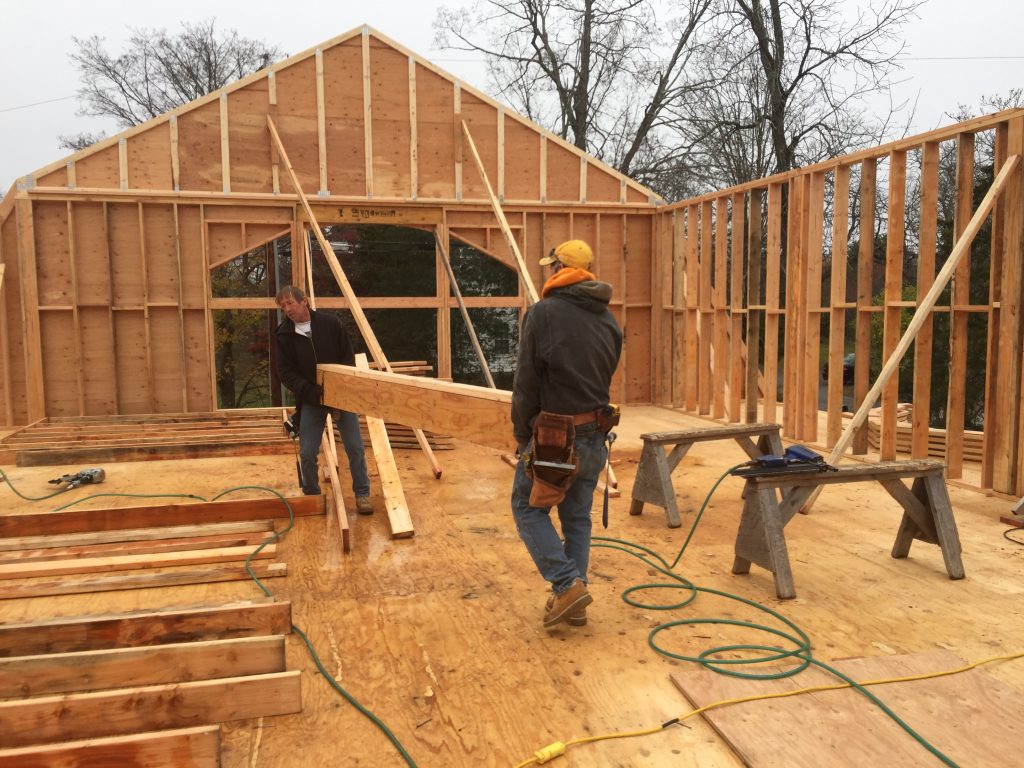 Central Hudson Gets Us Energized

Last year at about the same time I bought the property I noticed road crews doing some digging on the west side of route 9 from the Ledges to South Cross Road. Now I usually don’t pay attention to what is going on along the sides of the road, but because the road was occasionally closed and there were delays, as I sat there in traffic I noticed. Since I now owned the property across the street I was curious as to what was going on. So one morning I asked a supervisor about what they were doing and I was very happily surprised to hear they were bringing a natural gas supply line up route 9.  Apparently the Anderson School had asked to convert from LPG gas (the gas in your bbq tank)  to piped in natural gas. Since they were such a big potential customer, Central Hudson was eager to comply. Could it be possible that Central Hudson would bring a line across the road to supply my new hospital too? I asked and as I had hoped they were very happy to serve me. I guess their accountants told them that as long as they had made the considerable investment to bring natural gas up to South Cross Road one more customer would make their investment pay off even sooner.

Nothing has been straightforward with this project and neither was this. Bringing in gas requires the gas company to tunnel under route 9. The gas company wouldn’t tunnel until the building was up. And if the building wasn’t erected before the ground froze, tunneling wouldn’t be possible until spring. We wouldn’t be able to open until the gas lines were installed (we need heat!) if we were to open as planned in the winter. Our other course of attack would be to use LPG gas. However if we did that not only would it be more expensive, we’d have to have large tanks behind my beautiful new building and if we ever wanted to switch back to natural gas, because the fitting sizes of the two gases are different we’d have to rip out pipes and fittings already installed inside walls and in the gas burners. Not an ideal solution.

We knew we had to do some negotiating with Central Hudson.  What we asked them was the minimum stage of construction at which they’d bring gas to our door.  They agreed that once we have the foundation in and the first floor framed and sheathed with plywood they’d bring in the lines. That looked doable and the gas company scheduled the install for mid November pending that we kept to our construction schedule. By mid October the construction had reached the point where we could have the gas installed. Then, finally during the second week of November a team of workers showed up to dig a trench from the road, run the lines and tunnel across rt. 9.  One more item removed from our check off list. 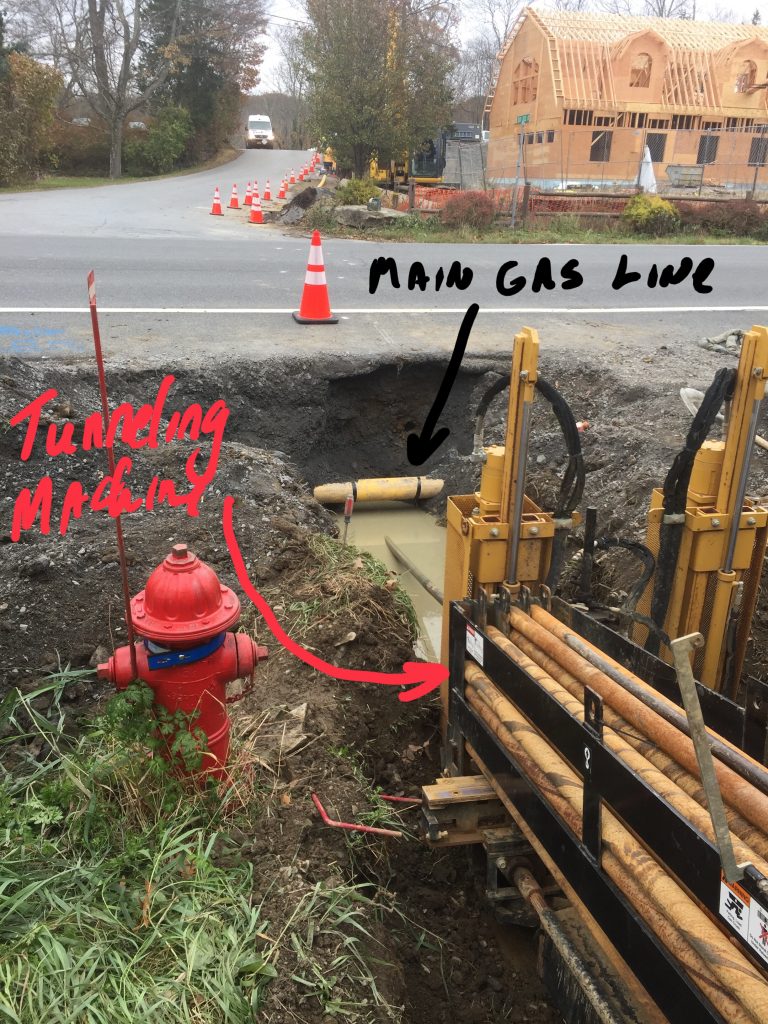 Tunneling Under the Road 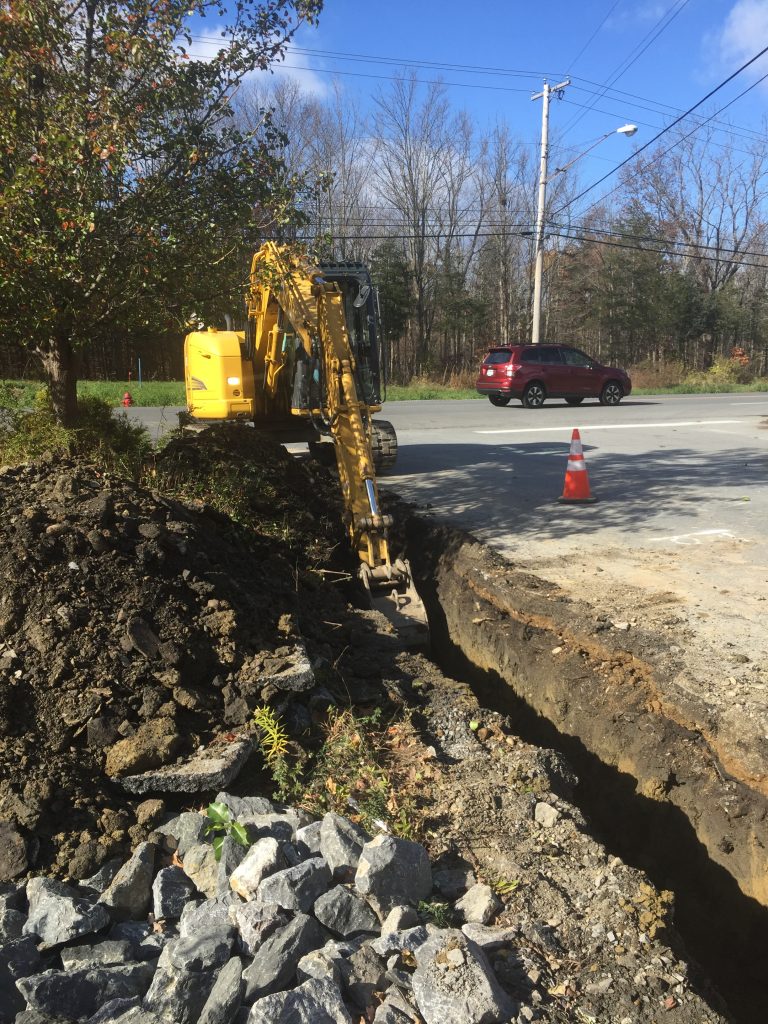 Digging for the Gas Main along South Cross Road 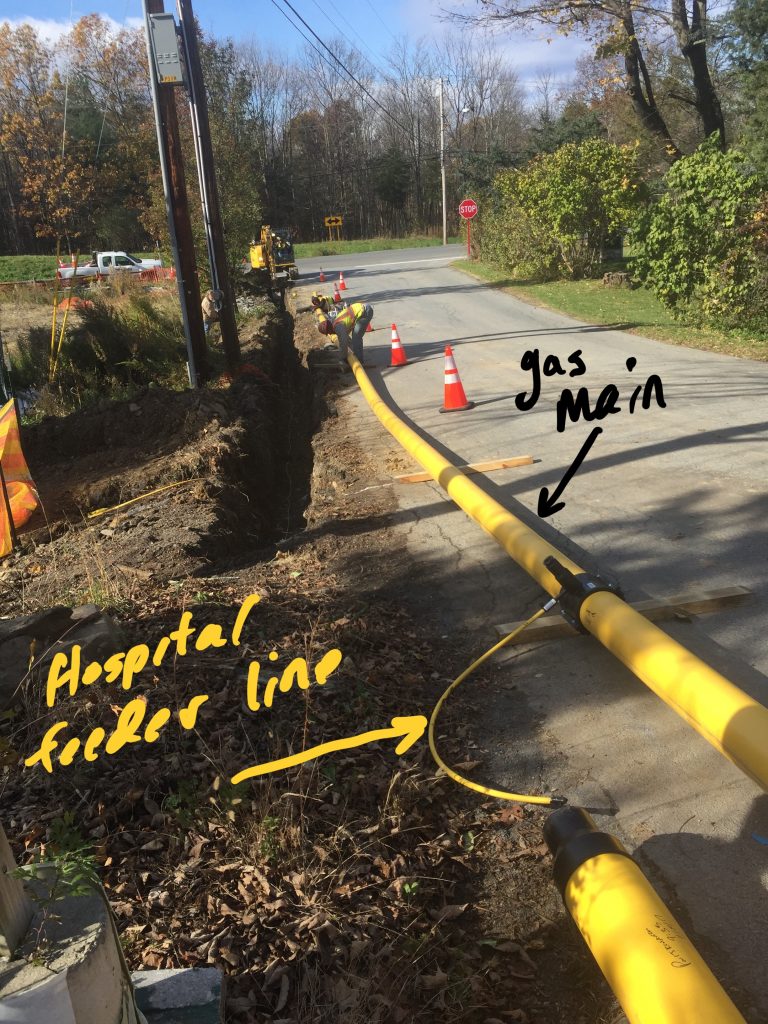 Getting ready to lay the main in the trench 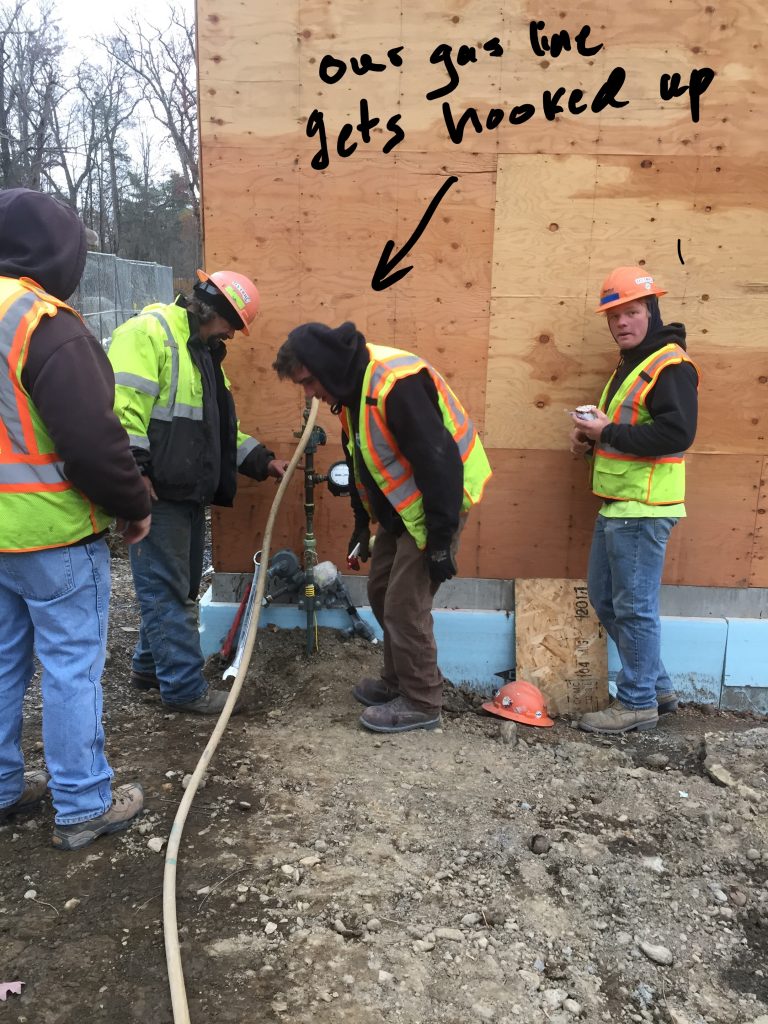 Gas line getting hooked up to the hospital

We Run Through the Second Floor

Right now we’re moving in high gear. In the blink of an eye it seemed the entire periphery of the second floor went up.  The next few days were spend re-enforcing the dormers and walls.  After the walls were all pulled together supports were put in place for the roof trusses. The roof trusses will be the last major structural element the building. 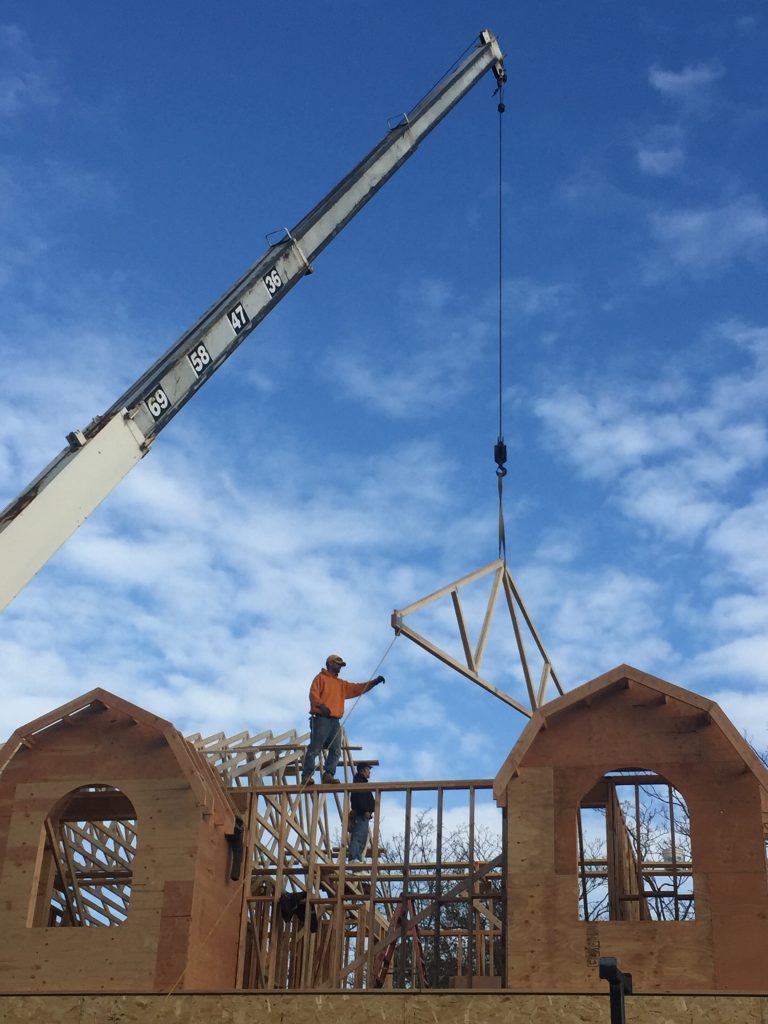 Crane placing one of the roof trusses in place

The crane showed up Monday morning and by the end of the day 52 trusses had been  lifted to the two carpenters standing on the roof supports (not my idea of a safe job) who grabbed them, maneuvered them into place and nailed them down. 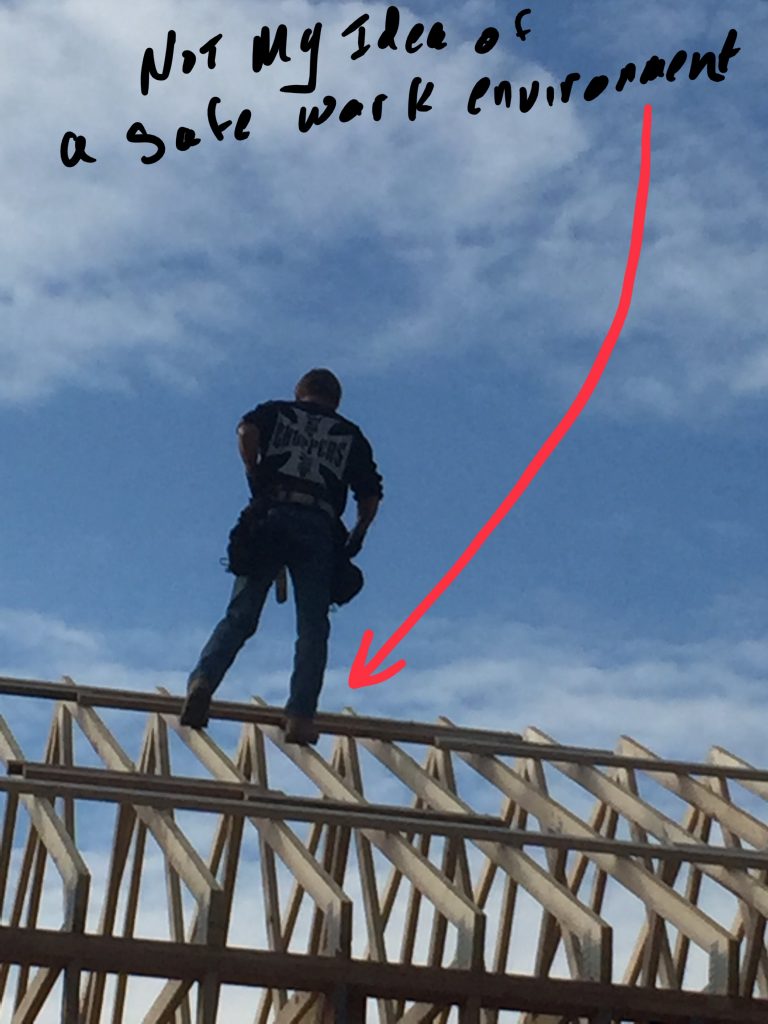 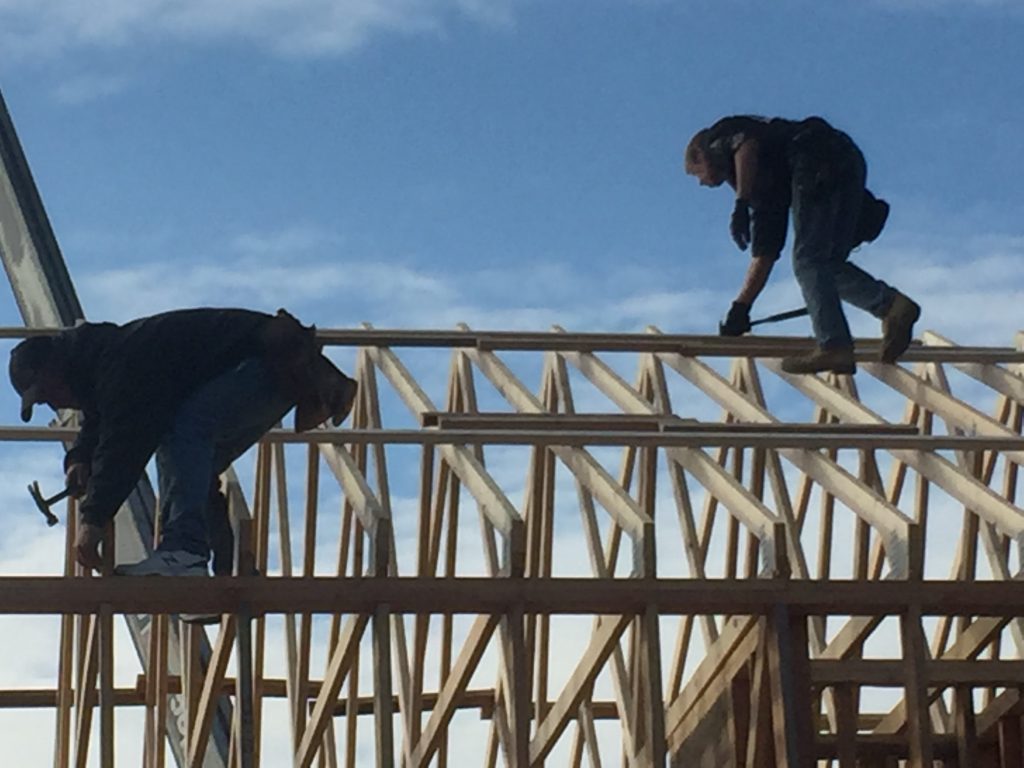 Nailing in supports for the roof trusses

That was a long day. The next two days were spent adding extra supports and tie downs so the roof will support what it has to support and also won’t blow away in a strong wind. In fact one of the workers had to spend two days putting special supports called hurricane tie downs to comply with the new building code which requires that the roof be able to stay put in the face of 108 mile per hour wind. 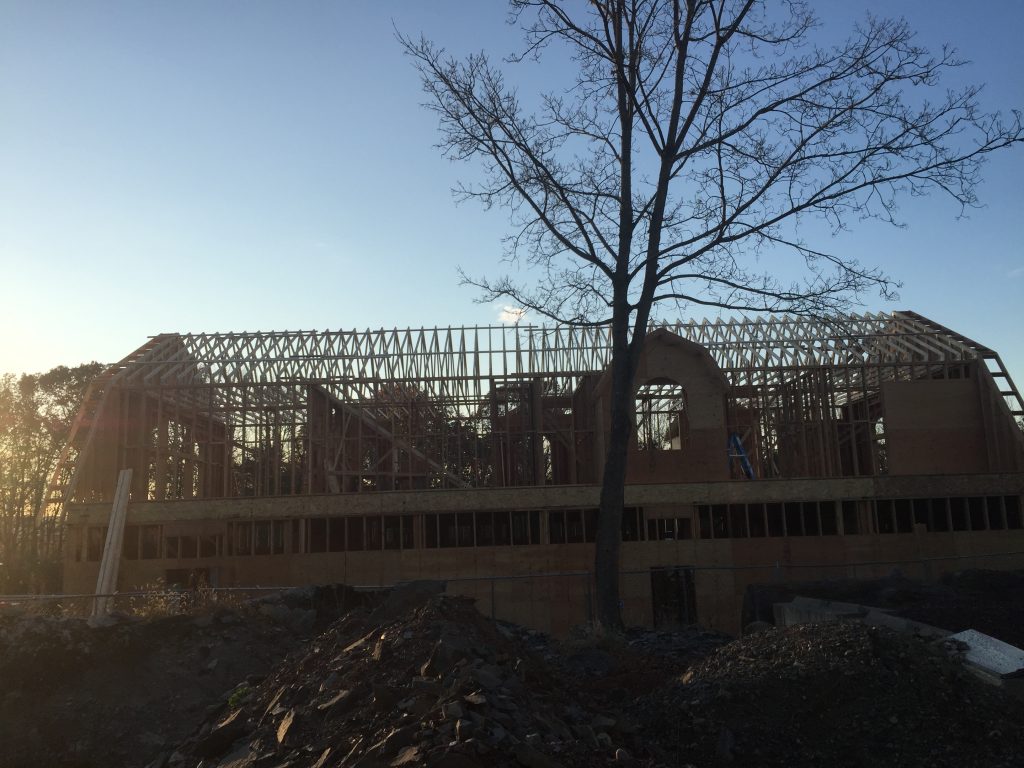 All the roof trusses installed

On Course to Button Everything Up

By the end of the week the roof trusses were completely tied into the rest of the structure.  Next step would be to start closing up the building. There were still lots of things to do on both levels; put in a staircase, dumbwaiter, start some of the plumbing etc. But that could all be done in nasty weather as soon as the building was closed up. The first step would be to install plywood sheathing over the roof and second floor. 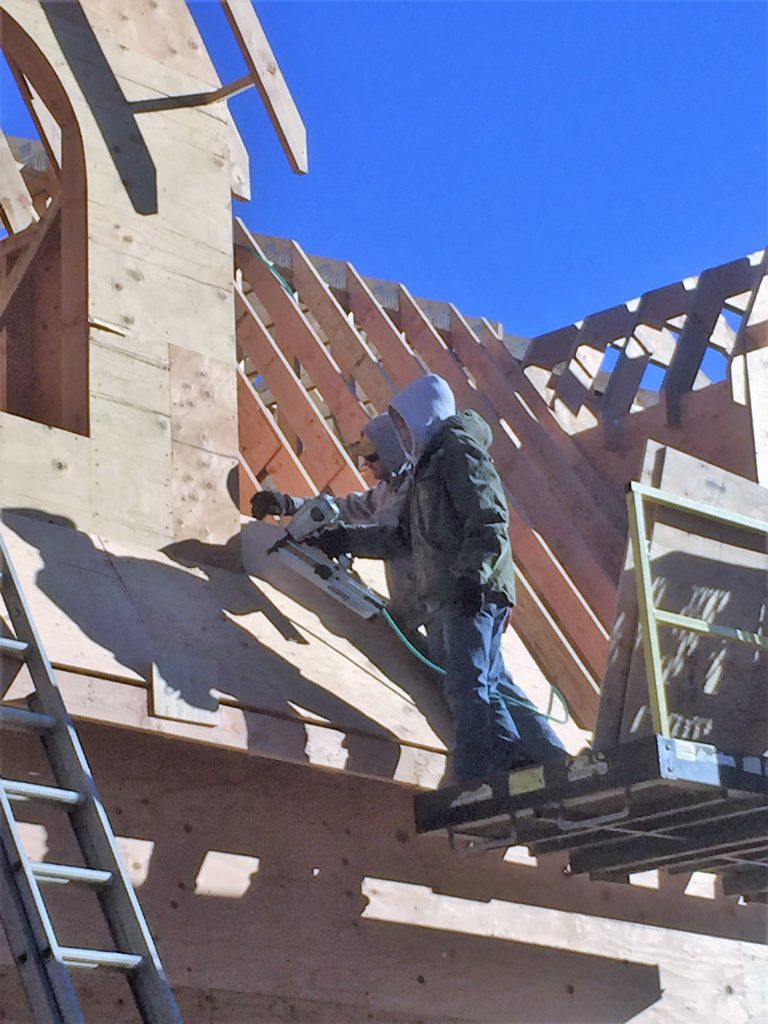 Nailing plywood around the dormers

On Friday the crew got started with that task and sheathed much of the west side, the side you can see from route 9.  By Monday, 3/4 of the building was encased in plywood. Whoopie! Now there won’t be any more down days due to bad weather. 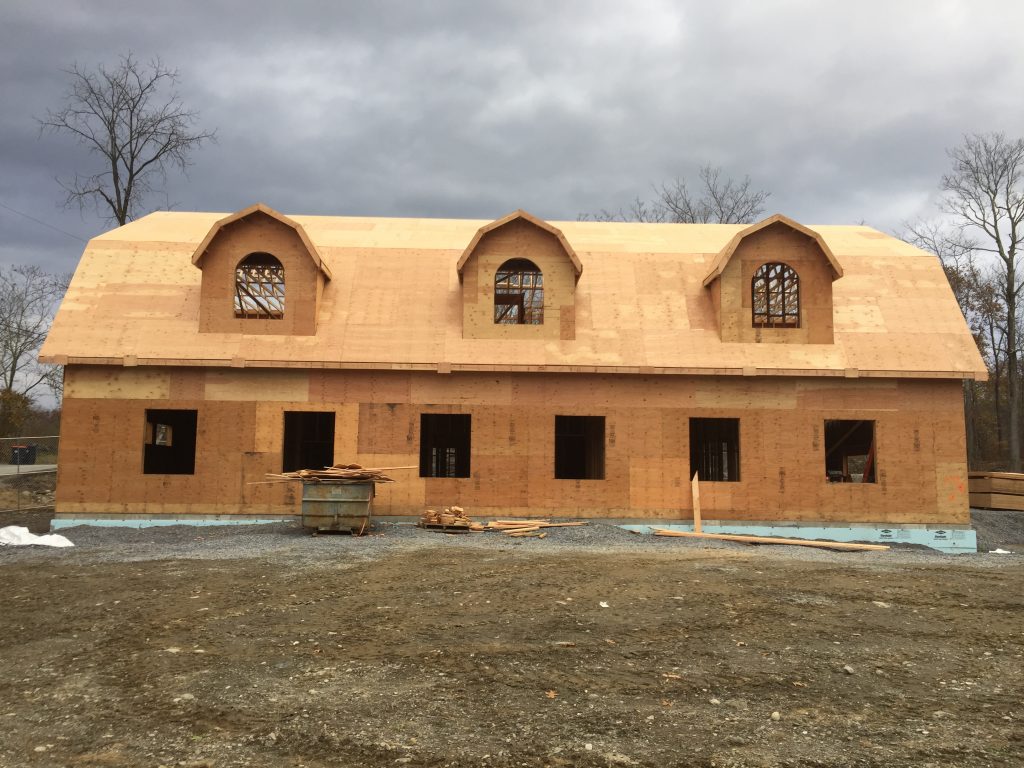 Now We See It

Now that the building is in its final form its getting quite a bit of attention. So many clients have come in this week and commented on the building. Now that the shape is very apparent they tell me how much they like it and can’t wait till we open. I can’t wait for the siding to start going on so all can see what a nice color we’ve selected for the building. But I’m getting ahead of myself, first plywood over the rest of the building and then windows before we can put on siding.

Meanwhile I hope you enjoy this video. A friend of mine has a drone and really had fun shooting this.  It was taken about 2 weeks ago, just before the roof trusses were put up. You can see the trusses lying on the ground (they’re the triangular pieces of wood.)

I had hoped to post it here but this version of the software won’t take any embedded videos so if you want to see the drone shots, click below and go over to facebook to look.

Click here to see the video  then scroll down to posts.