Wow things really start moving at this stage of the game. My contractor had told me that once the slab was poured I should be ready to see things take off. I really didn’t believe him, everything had been delayed so long I thought that things would continue to move at their own slow pace. I was wrong. The wood was all here- lets go! 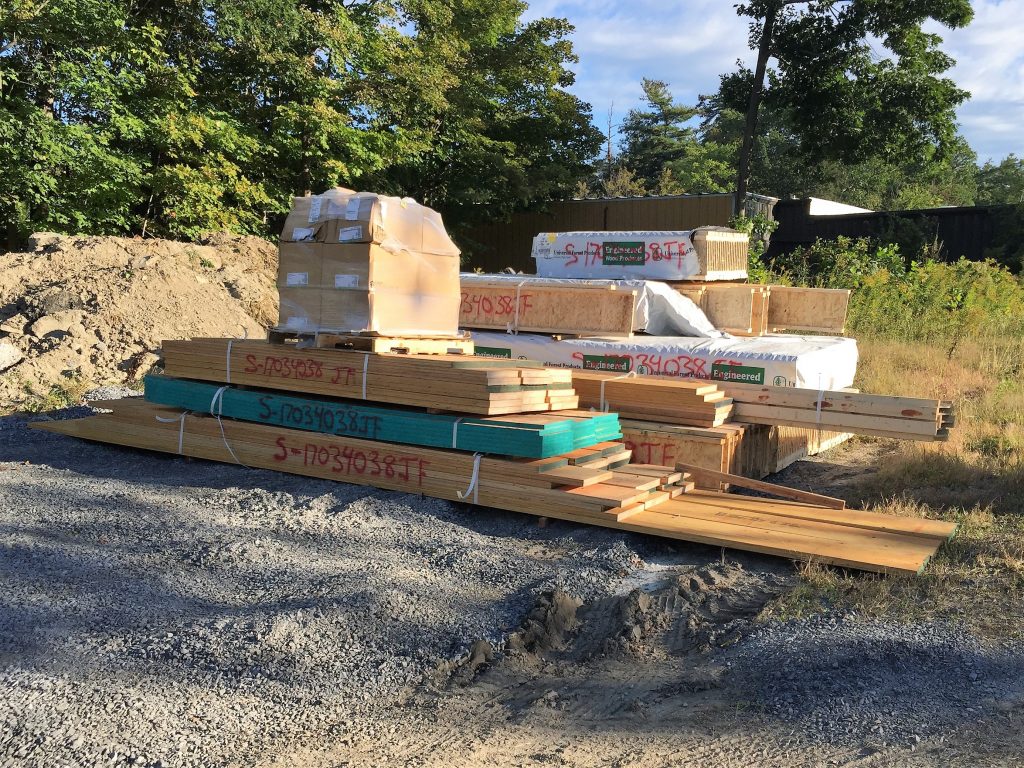 Put this puzzle together and boom! you have a building

Hurry Up and Wait

Mike is a master framer, he’s been at it for over 25 years so he knows his stuff. When he showed up on the job I was super excited, expecting the walls to go up lickety-split. So my enthusiasm became a little deflated when I realized it was only him on the job. How were things going to move on with only one worker I thought. To further dampen my enthusiasm instead of pulling out a hammer and a nail, Mike proceeded to walk around and around the foundation looking here and there and occasionally grunting. It seemed like it took him half a day to pull out the plans, look at them and grunt some more. Finally he headed over to the wood pile for a 2×6. I thought “yahoo” here’s my first wall. But instead, he laid it right down on the foundation wall and left it there. He then got piece after piece of 2×6 wood and completely covered the foundation walls.  The next 4 hours were spent with blueprints and pencil marking here and there on the wood. 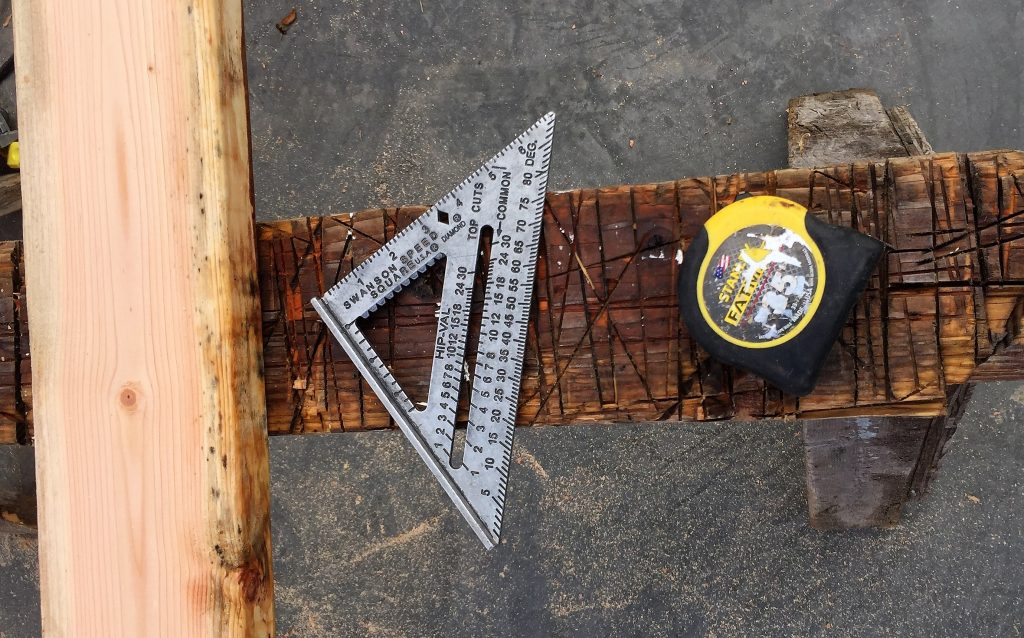 All Mike needed to set up for building walls

I looked at the scratches and they made absolutely no sense to me. Of course I’m sure a page of blood test results or an image from an ultrasound would make no sense to Mike. This went on for three days. Every time I drove to the office, every time I drove home I expected to see a wall and instead I saw what I thought was nothing.

Then on day four while on my way to the office (the old one) I noticed that there were more cars at the building site. Were things about to start happening? I was so excited to get back to the site that I finished my morning appointments, skipped my lunch break and quickly drove the three miles up the road. I was really happy with the progress I saw. Next to each of the 4 outside walls of the foundation were the boards that had been placed on the foundation walls and perpendicular to them were the rest of the boards that would create my walls. I breathed a sigh of relief, after all these months things were really moving into high gear. 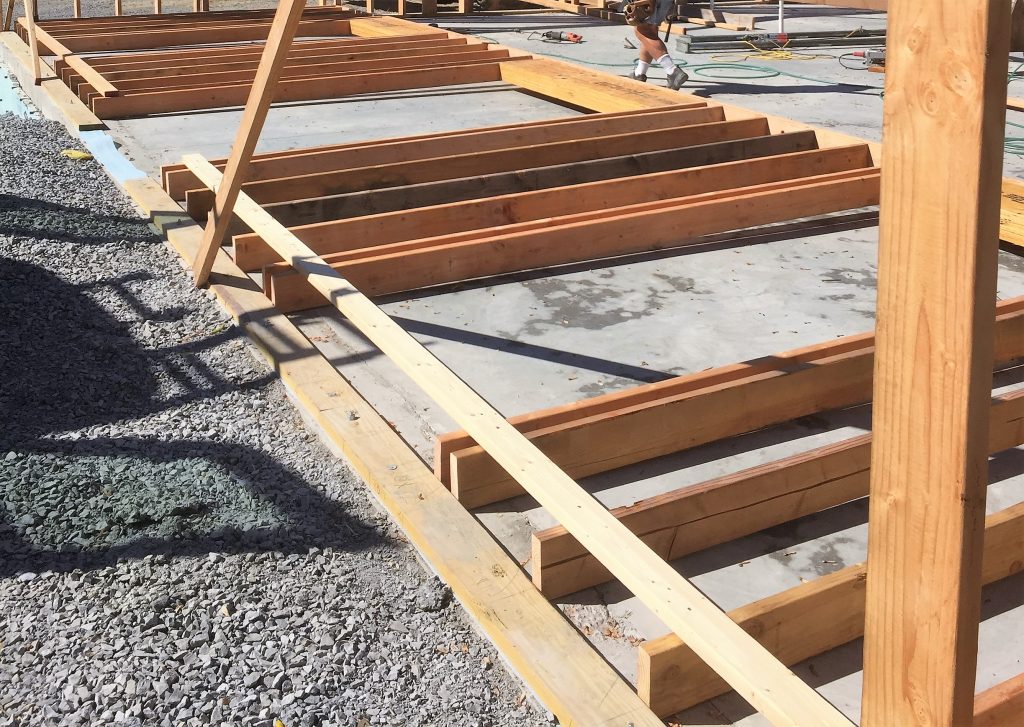 Wall laid out and ready to raise

Seeing I wasn’t needed (or if truth were to be told probably not wanted either) I went out to lunch and then back to the office where I cared for my evening appointments.  Passing by on the way home it was unfortunately past dark and I couldn’t see anything. Oh well, I’d pass by again early in the morning.

The very next morning I was back at the site and was really amazed with the changes that had occurred in just 24 hours. Three sides, not 3 walls, but 3 entire sides were standing up fixed by supports. Now I realized what those 3 days of preparation were for. Everything had been marked, everything measured so that when the entire crew showed up they would work like a well oiled machine and bang, bang, bang, the walls would go up. 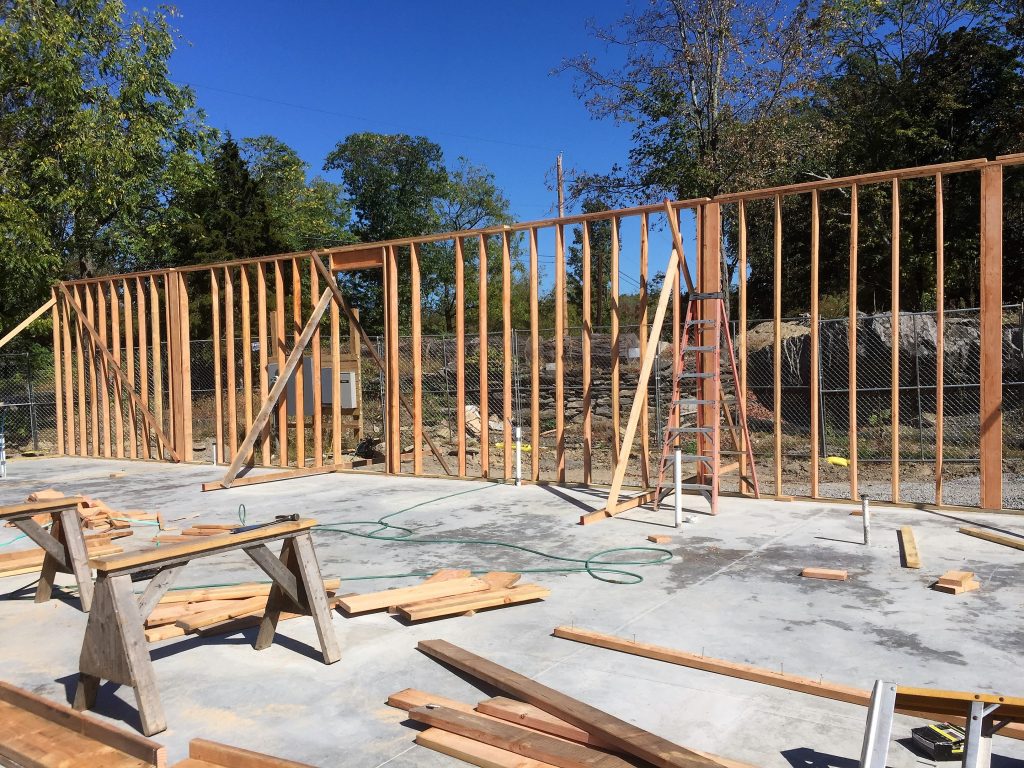 First wall is up

I’m the kind of guy who pulls over to the side of the road to take a picture of the odometer in his car when it turns over from 99999 to 100000. So although I was ecstatic that the walls were up I hadn’t seen it happened. I made sure to ask when would the last outside wall go up.  They told me it would happen after lunch. So using the Terminator’s immortal words I said “I’ll be back” and left for the office. I quickly forgot about what was going on at the construction site and concentrated on my cases. There were the usual yearly wellness checks, vaccinations and a few ill pets that I was determined to make well again. Once appointment hours were over there was Princess who’s teeth made both my staff and her owner gag. She needed our attention if she was going to ever grace mom’s easy chair again. After making sure her breath was to “die for” not to “die from” it was time to move on to Charlie a 12 month old tomcat who was starting to feel the call of the wild. His problem (well I’m sure he wouldn’t think it was his problem) was quickly cured and I watched both my patients recover uneventfully.

Now that the first half of the day was done, I could turn my recovering patients over to my terrific technician Katie and head up to the site.  Luckily I was just in time. They were about to raise the last outside wall. I expected this intense scene with all four guys just pushing up the wall with sheer muscle strength. At the same time I wondered why it was made in one section as a 40 foot wall would be pretty heavy to lift up. To my surprise no one would be lifting this wall. All the work was done on the floor. The workers simply attached jacks to the wall and started cranking just like you’d crank up your car after a flat. Mike directed them, making sure each jack moved at the same rate so the wall wouldn’t twist and split. Then in less than two minutes the wall just rose into place.  Within 5 minutes it was standing with supports attached. 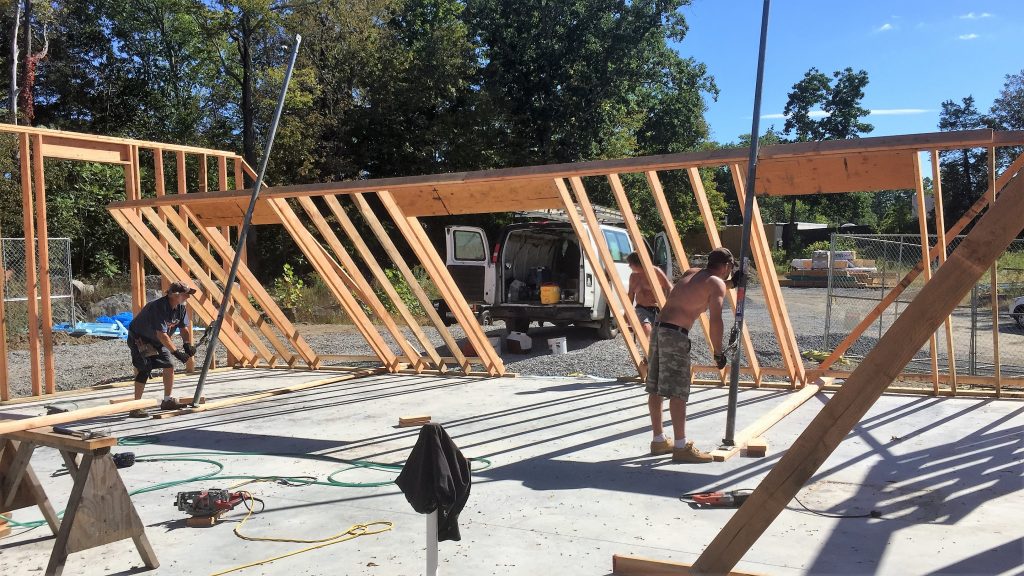 Jacking up the last wall

Once all the perimeter walls were steadied and braced it was time to layout the interior walls. Again, we needed a half day of measurements and a bunch of chalk marks on the floor. This time I wasn’t impatient, I knew that a whole bunch of measurements had to happen first. Also at this time all the plumbing placements were checked. Drain lines needed to come up inside the walls, not in the middle of a room. Happily, the plumber’s measurements were spot on and all the pipes came up exactly where they were supposed to be, nicely nestled within walls. To start the walls the framing crew nailed 2 x 4 boards into the concrete floor. These boards would be the bottom plates of the interior walls. 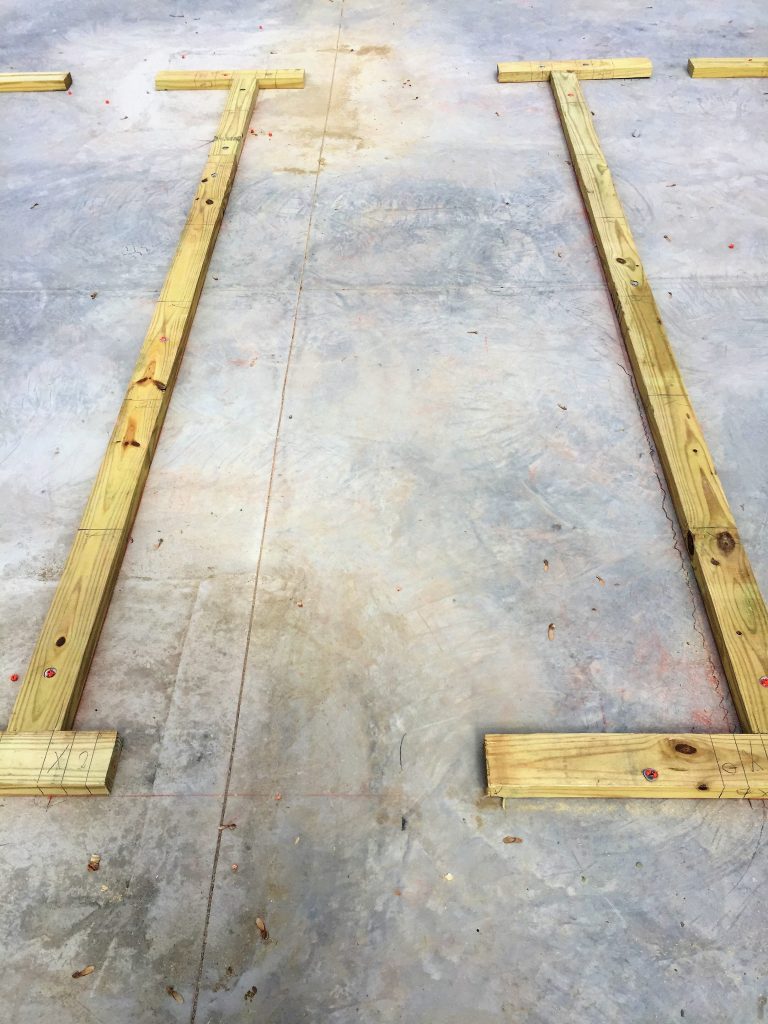 Soon the interior walls went up.  Being smaller and lighter these went up very fast. Every time I stopped at the site another room had been framed in. After the interior walls were finished, all the doors and windows needed to be framed in and fire blocking boards had to be put between the vertical studs. Here are some pictures of the carpenters doing those tasks. 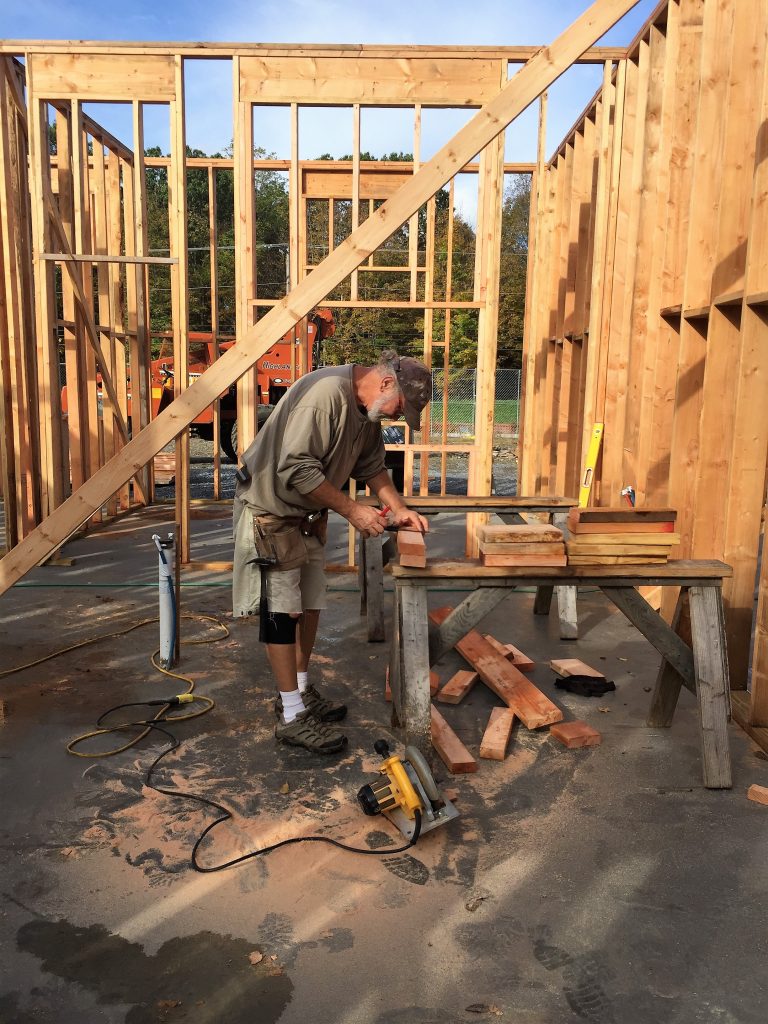 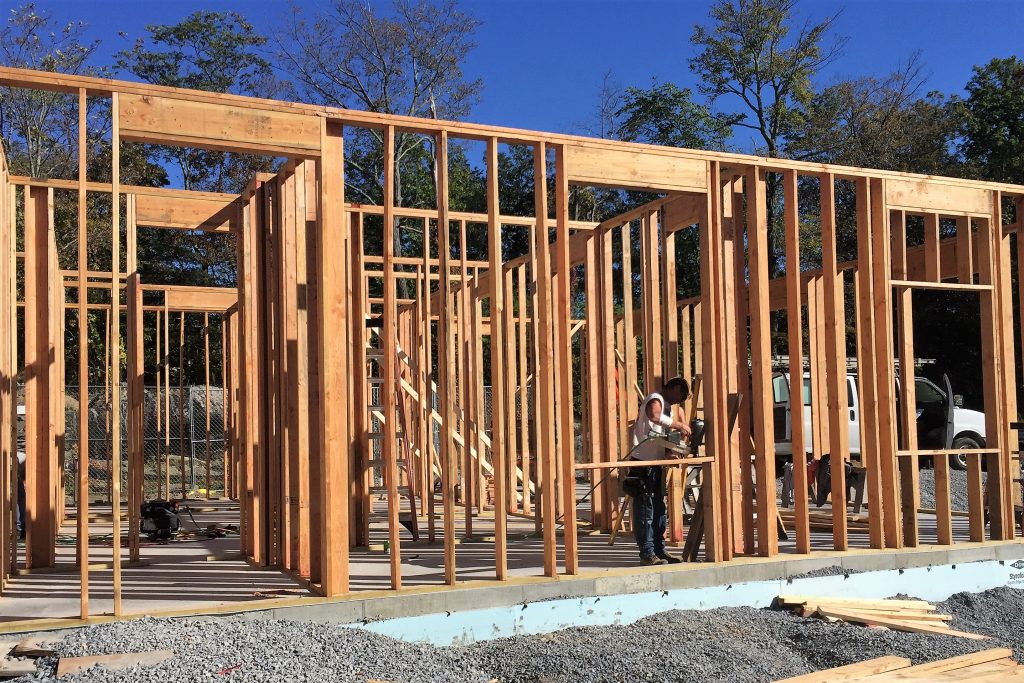 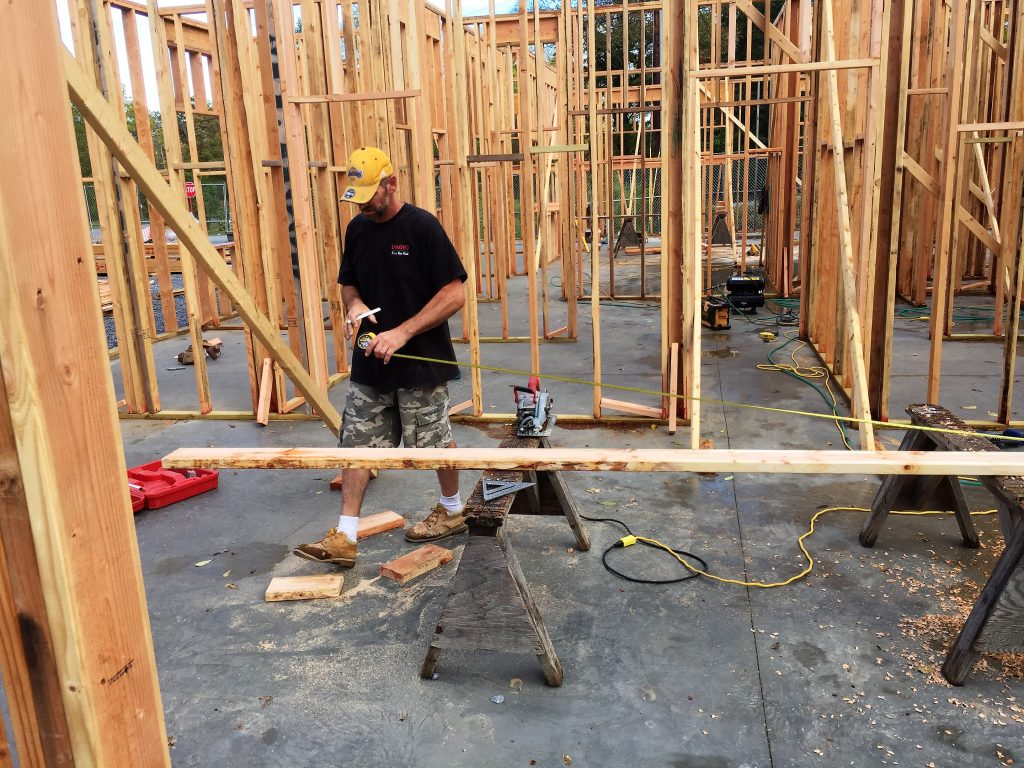 It’s nice getting my first view of what the rooms I’ve planned will look like. Here is the setting sun shining in the waiting room. Although once the walls are covered we won’t have this much light, the large windows will make this a very well lit room. 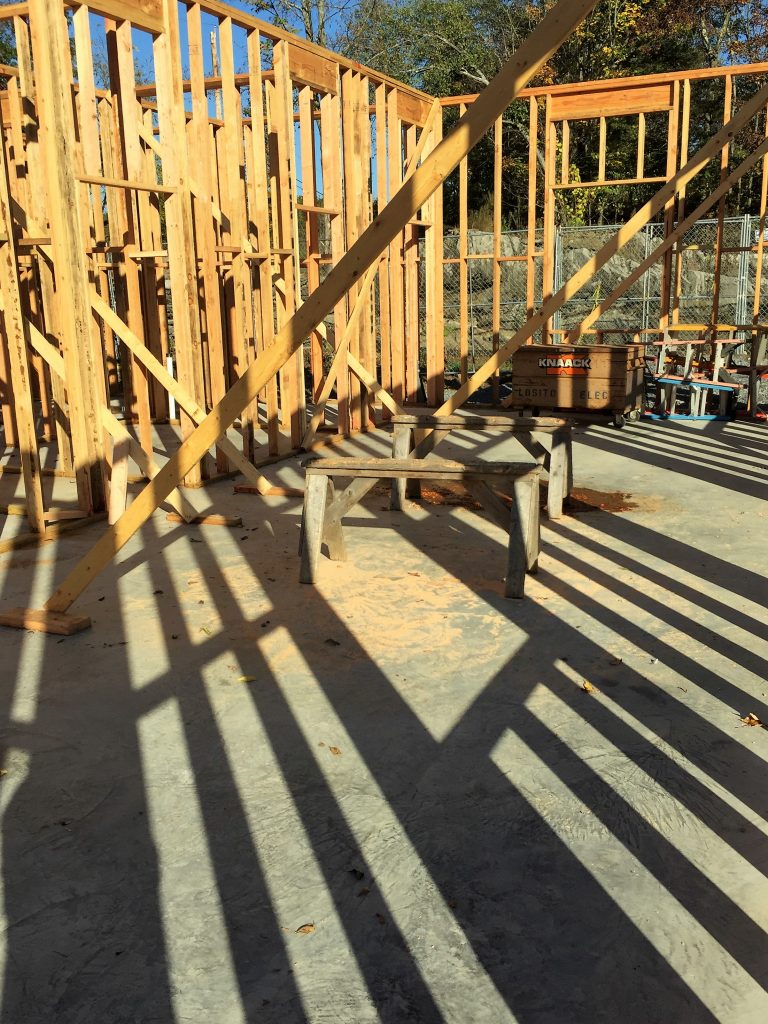 And hers’s both an exam room and surgery showing the large windows and light streaming in. 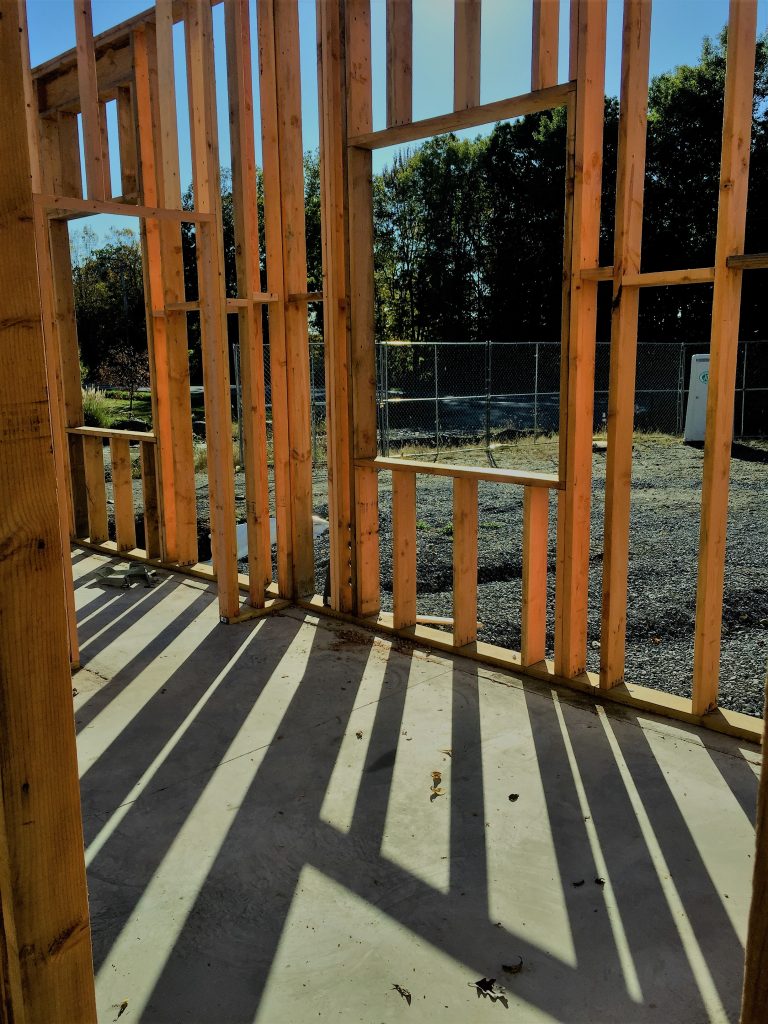 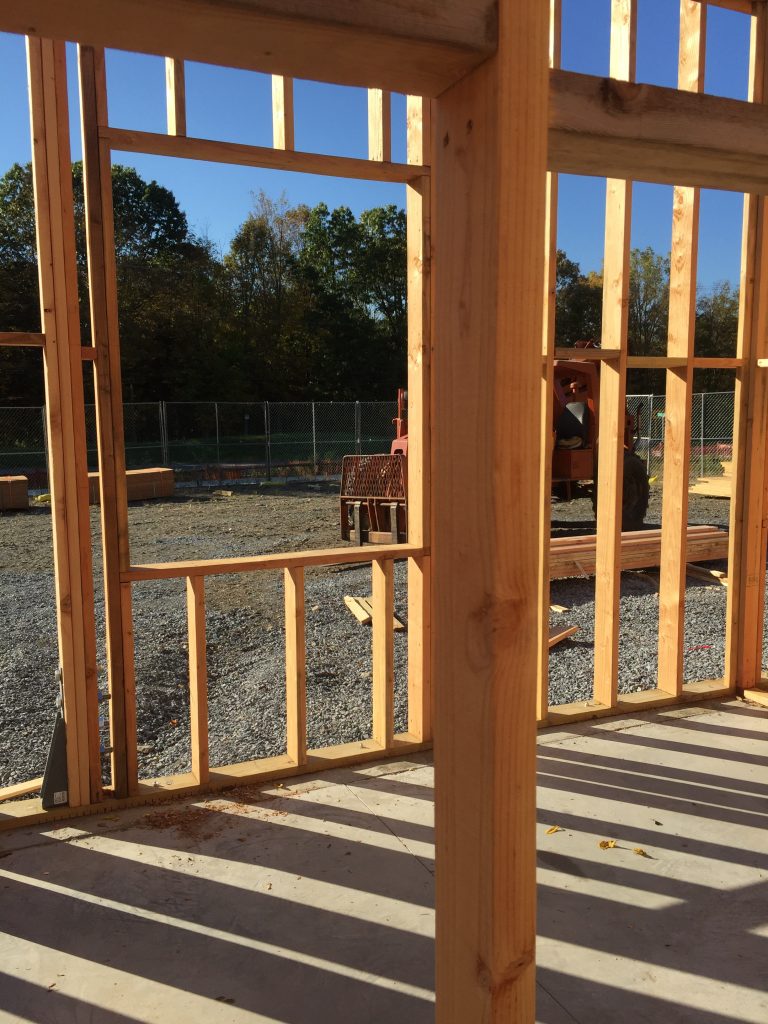 Now that we’re wrapping up the first floor framing its time to start planning the second floor. Although I’ve done quite a few nutty things in my life, this is not something you’d catch me doing! 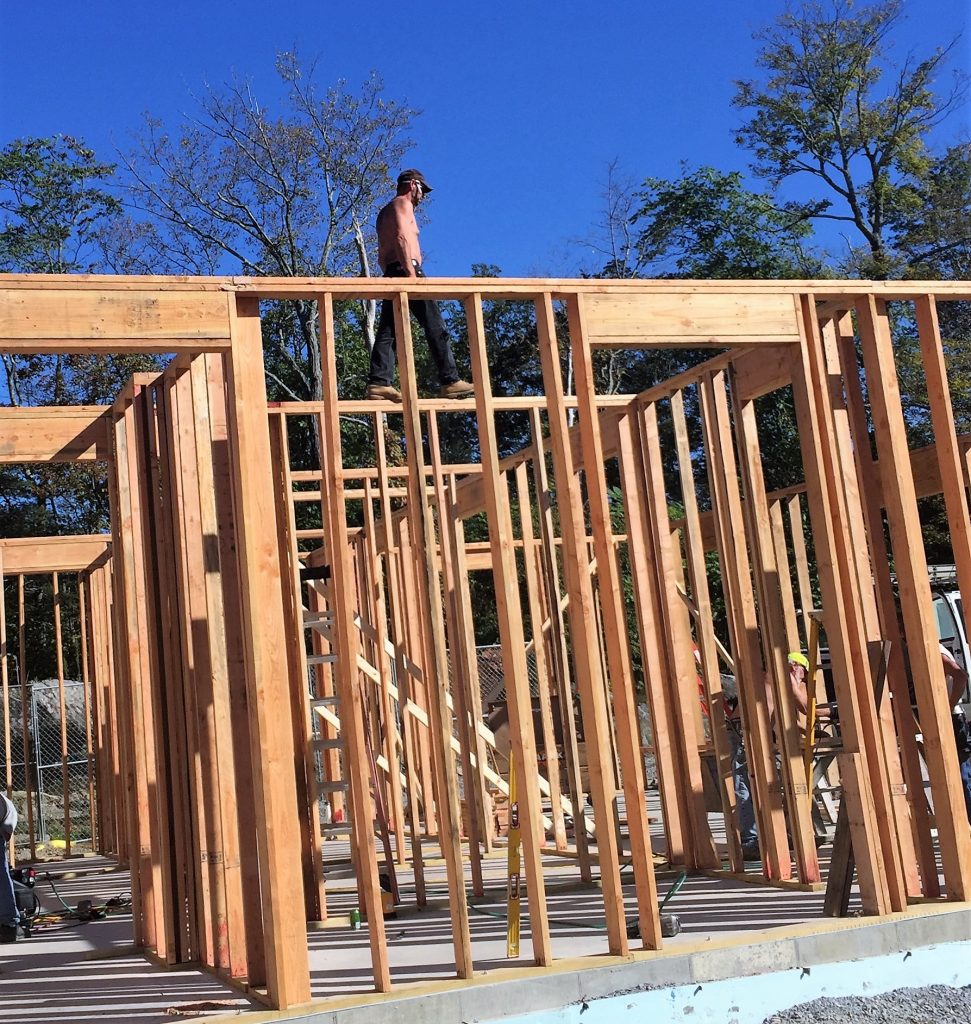 High wire act- not for me!